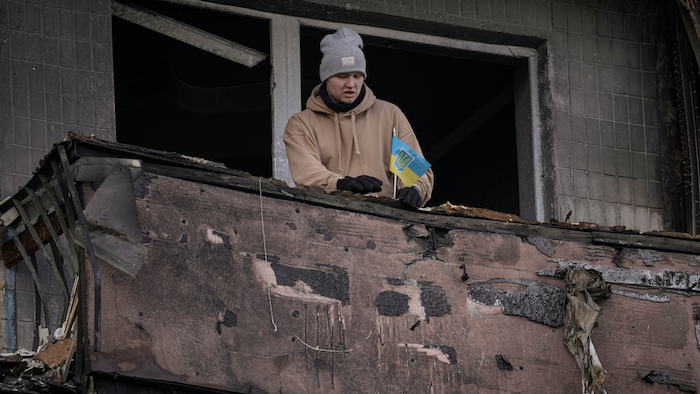 A man places a small Ukrainian flag on a burnt balcony of an apartment hit by an artillery strike, Kyiv, March 14, 2022.
AP Photo/Vadim Ghirda

BERLIN (AP) — A senior German official predicted Tuesday that the war in Ukraine and its impact on fossil fuel prices worldwide will provide a “massive boost” for the means and measures needed to curb climate change.

“The core technologies to become independent of (Russian President Vladimir) Putin and to drive forward climate protection are the same,” he told reporters in Berlin.

“They are renewables, they are efficiency and electrification,” said Graichen. “These three will now get a massive boost.”

Graichen spoke at the presentation of the annual report on Germany's greenhouse gas emissions, which rose sharply in 2021 after a pandemic-induced dip the year before.

Preliminary figures show Germany released the equivalent of 762 million metric tons of heat-trapping carbon dioxide into the atmosphere last year. That's 33 millions tons, or about 4.5%, more than in 2020.

Germany failed in its efforts to cut emissions by 40% by 2020 compared with 1990 levels. The government has acknowledged that a huge effort will be required to halve emissions by 2030 and achieve ‘net zero’ by 2045.

Among the measures currently promoted by the government are the replacement of oil-or-gas furnaces for home heating with highly efficient electric heat pumps.

The head of the German Environment Agency, Dirk Messner, suggested transport sector emissions could also be sharply reduced if drivers were to limit their speeds to 100 kph (62 mph) on highways and 80 kph (50 mph) on large extra-urban roads. Germany currently has no universal speed limits on its Autobahn network, and the issue of introducing one is politically contentious.