The new joint fleet will patrol vast swaths of the region's volatile waters. 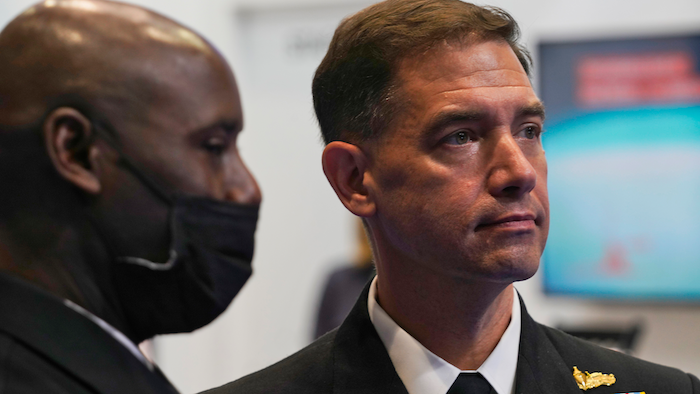 Vice Adm. Brad Cooper, who leads the 5th Fleet, told The Associated Press that 100 unmanned drones, both sailing and submersible, would dramatically multiply the surveillance capacities of the U.S. Navy, allowing it to keep a close eye on waters critical to the flow of the global oil and shipping. Trade at sea has been targeted in recent years as Tehran's nuclear deal with world powers collapsed.

“By using unmanned systems, we can just simply see more. They’re high-reliability and remove the human factor,” Cooper said on the sidelines of a defense exhibition in Abu Dhabi, adding the systems are “the only way to cover on whatever gaps that we have today.”

Cooper said he hopes the drone force using artificial intelligence would be operational by the summer of 2023 to put more “eyes and ears on the water.”

The Bahrain-based 5th Fleet includes the crucial Strait of Hormuz, the narrow mouth of the Persian Gulf through which 20% of all oil passes. It also stretches as far as the Red Sea reaches near the Suez Canal, the waterway in Egypt linking the Mideast to the Mediterranean, and the Bab el-Mandeb Strait off Yemen.

The high seas have witnessed a series of assaults and escalations in recent years, following former President Donald Trump's decision to pull the United States out of the nuclear deal and reimpose devastating sanctions.

A maritime shadow war has played out as oil tankers have been seized by Iranian forces and suspicious explosions have struck vessels in the region, including those linked to Israeli and Western firms. Iran has denied involvement in the attacks, despite evidence from the West to the contrary.

“It’s been well-established that Iran is the No. 1 in the primary regional threat we are addressing,” Cooper said. “There’s the ballistic missile, cruise missile and UAV (drone) component, both in their capability and their mass proliferation, as well as well as the proxy forces.”

Iran sponsors proxy militias in Iraq, Syria, Lebanon and Yemen that give it a military reach across the region.

As Yemen's 7-year-old civil war grinds on, the Iran-backed Houthi rebels have dispatched bomb-laden drone boats toward Saudi waters that have damaged vessels and oil facilities.

There has also been a recent string of tense encounters between Iranian and American naval boats in Mideast waters. The confrontations have underscored the risk of an armed clash between the nations.

Notably, however, Cooper said the U.S. has not seen such an episode in the past few months, as diplomats in Vienna attempt to resuscitate the tattered atomic accord.

“If you look back over the last couple of months, I would say it’s status quo,” Cooper said. “There have been some periods where they have had an uptick in activity. ... The overwhelming majority of these interactions are safe and professional.”

Iran's mission to the United Nations did not immediately respond to a request for comment.

The shared threat of Iran has prompted a rapid realignment of politics in the Middle East. In 2020, the United Arab Emirates and Bahrain normalized ties with Israel in a series of U.S-brokered accords.

Those warm relations have even extended into a form of military diplomacy. Israel for the first time joined in a massive U.S.-led naval exercise in the region earlier this month, publicly participating alongside other Gulf Arab states with which it has no relations, including Saudi Arabia.

Cooper said that Israel likely would join in the Navy's unmanned naval drone task force in the region.

“I would expect exercises in the future where we would work side by side,” he said.