Bath Iron Works is back on track after a two-month strike last summer. 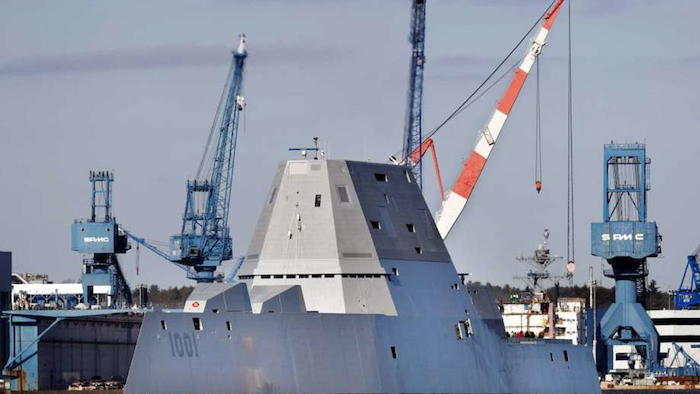 BATH, Maine (AP) — The U.S. Navy's top officer liked what he saw Monday during a tour of shipbuilder Bath Iron Works, praising the shipyard and its workforce for getting back on track after a strike last summer.

Adm. Mike Gilday, chief of naval operations, applauded the patriotism he saw in the workforce and described the shipyard founded in 1884 as a “national treasure" after touring ships under construction, and speaking to shipbuilders and shipyard leaders.

Ramping up construction of destroyers is important as the U.S. Navy faces growing competition from China and Russia.

“Bath is on a path here to begin delivering two ships by the end of the year. That’s a strong trajectory for Bath Iron Works. And it’s not without a lot of hard work during a pandemic to get to that point,” he said.

The General Dynamics subsidiary was more than six months behind schedule before a two-month strike by production workers last summer. The delays were serious enough to knock the shipyard out of contention for a lucrative contract to build a new class of frigates, officials said.

Collins said she witnessed “an unprecedented cooperation” and King said there was "a new spirit of cooperation.”

“I’ve seen a mood here in the last several visits that’s unlike any other I’ve experienced since I’ve been here,” King said. “They’re all focused on one goal, which is meeting schedule and meeting budget,” he added.

The strike by production workers represented by Machinists Union Local S6 happened in the middle of the pandemic. The shipyard said it wanted more flexibility to get caught up on a backlog of work while workers didn’t want to give up ground to subcontractors.

The shipyard builds destroyers, the workhorse of the Navy fleet. The ships have the ability to provide air defense while simultaneously waging war against submarines and surface warships.

The shipyard has hired nearly 3,000 workers since 2019 as part of its effort to speed up production and meet the Navy’s timetable for delivering ships, said shipyard spokesperson David Hench.