Hackers attacked some 200 companies and research organizations, including the country’s space agency. 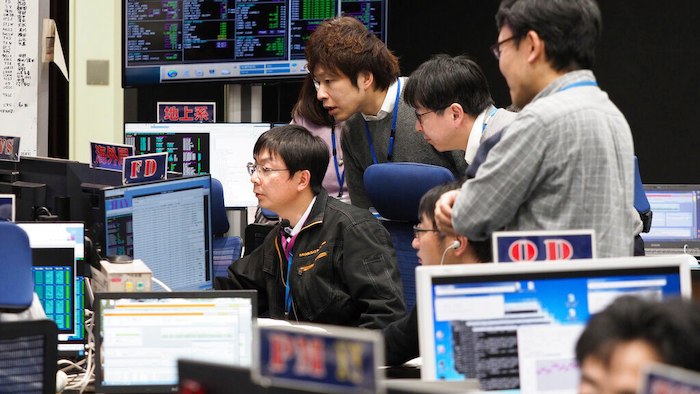 Staff of the Hayabusa2 Project watch monitors for a safety check at the control room of the JAXA Institute of Space and Astronautical Science in Sagamihara, Japan, Feb. 21, 2019.
ISAS/JAXA via AP, File

TOKYO (AP) — Tokyo police are investigating cyberattacks on about 200 Japanese companies and research organizations, including the country’s space agency, by a hacking group believed to be linked to the Chinese military, the government said Tuesday.

Police believe a series of hacks of JAXA were conducted in 2016-2017 by “Tick,” a Chinese cyberattack group under the direction of a unit of the People’s Liberation Army, Kato said.

A suspect in the JAXA case, a Chinese systems engineer based in Japan, allegedly gained access to a rental server by registering himself under a false identity to launch the cyberattacks, Kato said, citing the police investigation.

NHK public television said another Chinese national with suspected links to the PLA unit who was in Japan as an exchange student was also investigated in the case. Both men have since left the country, it said.

Police are investigating the attackers’ intent and methods, while also pursuing scores of other cyberattacks that they suspect are linked to China’s military, Kato said.

“The involvement of China’s People’s Liberation Army is highly likely,” Kato said. He added that no actual data leak or damage has been found so far but police are urging the companies to strengthen their protection.

Japan's Defense Ministry says cyberattacks are part of rising security threats from China as it becomes more assertive in the region — a shared concern discussed in April 16 talks at the White House between U.S. President Joe Biden and Japanese Prime Minister Yoshihide Suga.

“Groundless speculation should not be allowed. China is firmly opposed to any country or institution using cyberattacks to throw mud at China or to serve the despicable political purposes with cybersecurity issues," he said. "China is willing to strengthen dialogue and cooperation with all parties to jointly address cybersecurity threats.”