The Mississippi River is already above flood stage in several states. 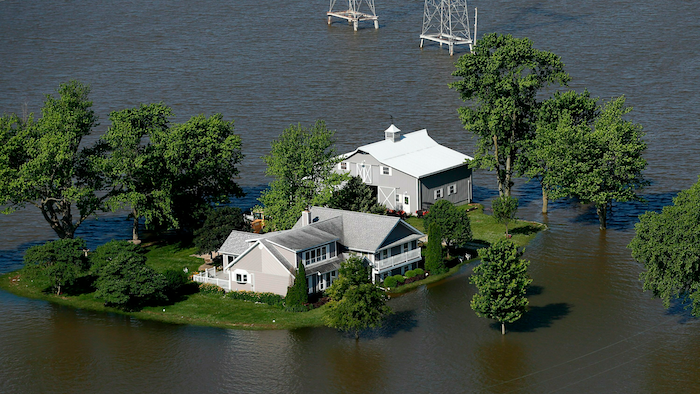 O'FALLON, Mo. (AP) — With flood concerns already high in the Midwest, the U.S. Army Corps of Engineers is warning that many levees on the Missouri and Kansas rivers that were damaged during devastating floods last spring remain vulnerable to high water.

The National Weather Service has said Nebraska, Iowa, Kansas and Missouri and eastern North Dakota and South Dakota face an above-average flood risk this spring, due largely to soil saturation to the north. Already, some rivers are high, including the Mississippi, which on Tuesday was a few feet above flood stage in several towns in Iowa, Illinois and Missouri. No major damage was reported.

A bigger concern is in parts of eastern Kansas and western Missouri. Record flooding in 2019 damaged several Missouri River and Kansas River levees, many of which have yet to be repaired. The Kansas City District of the Corps of Engineers said in a news release that “challenging weather conditions and higher flows” persisted through the winter and continue, delaying the ability to fully assess damaged levee systems.

The Corps said projects at 13 sites are preparing to begin work, and more than 20 additional bid openings or contract awards are expected by the end of April. More than two dozen other repair projects in the Kansas City district, though, aren't ready for bids. The district covers parts of western Missouri, northeastern Kansas, southern Nebraska and southwestern Iowa.

For now, both the Kansas River and the Missouri River are below flood stage.

Some key projects have been completed. In February, crews closed the final breach of a Missouri River levee in northwestern Missouri near Rock Port. It was one of several breaks along the levee section that saw thousands of acres of mostly farmland submerged and a section of Interstate 29 and other roads in Missouri, Iowa, Nebraska and Kansas damaged and closed to traffic for weeks.