Officials in Seward worry flood waters could overflow a diversion dam and rush down a major road. 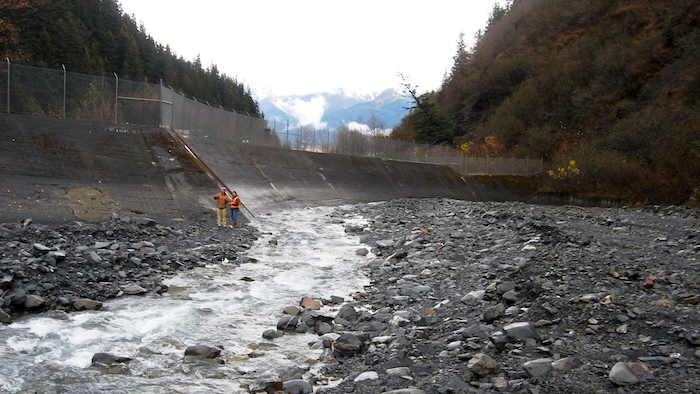 This undated photo shows a diversion dam on Lowell Creek, high above the town of Seward, Alaska.
U.S. Army Corps of Engineers via AP

ANCHORAGE, Alaska (AP) — Every fall, heavy storms test Seward's antiquated flood-control system, leading to fears of a major disaster should it finally fail after nearly eight decades of diverting a fast-moving creek away from its historical route through town.

Officials say a tunnel that carries flood waters from Lowell Creek to Resurrection Bay could get clogged at the creek entrance by some of the massive tree stumps that wash down the steep canyon. In that scenario, water would overflow a diversion dam at the tunnel entrance, rushing down what is now Jefferson Street. In the community of nearly 2,600, this is a major road near homes, a hospital and an assisted living facility.

Floodwaters have come within inches of the banks in past years. In the heaviest rains, city crews must use excavators and bulldozers to clear tons of glacial debris at the tunnel's spillway to prevent flooding at a nearby road, bridge, shellfish hatchery and other structures.

"I call it the most dangerous dam in the state," says state dam safety officer Charles Cobb.

Yet for years the Lowell Creek dam and tunnel complex has not complied with a state rule requiring inspections by operators of such high-hazard dams every three years. The last comprehensive field inspection was conducted in 2010 by the U.S. Army Corps of Engineers, which completed building the tunnel into Seward's Bear Mountain in 1940.

Cobb said a unique ownership link between the city and the Corps complicates corrective action. The Corps is responsible for maintaining the 690-yard-long tunnel through at least 2022, while the city is in charge of the operation and routine maintenance of the adjacent 400-foot diversion dam.

"The Corps of Engineers and the municipality and the state recognize that there's some deficiencies out there, and there's steps being taken to try to come up with a reasonable solution to protect the people of the city of Seward," Cobb said.

The Lowell Creek dam complex is among those rated as high-hazard in the state because of the potential for loss of life if they failed. It was examined in an Associated Press review of such dams across the country.

The AP identified at least 1,680 dams nationwide that are high-hazard and are considered to be in poor or unsatisfactory condition, potentially putting thousands of American lives at risk if those dams were to fail. The investigation covers the U.S. territory of Puerto Rico but excludes five states that did not fully comply with records requests.

The AP review found five dams in Alaska deemed to be high-hazard and in poor condition, all in sparsely populated areas. The Lowell Creek complex also is designated as a high hazard dam, but it has no formal condition designation.

A report by the Corps of Engineers said the condition of the diversion dam was found to be adequate during its 2010 field inspection, while adding this caveat: "But the system as a whole has unacceptable high risk under severe loading system."

Former Seward Mayor David Squires said the diversion dam was built as a levee, but later designated as a dam under federal rule changes. That puts it out of compliance for today's stricter building standards for dams. Once the outdated parts of the system can meet current standards, the inspection rules will be followed, he said. Until then, any inspection would show it to be out of compliance.

The city is waiting for the Corps to complete a $3-million feasibility study it helped fund to study options for bringing the system up to acceptable safety standards.

Corps officials say the agency also has shouldered much of the cost of major repairs, particularly in later decades when erosion ate away at the lining of the tunnel. Last year, the federal agency completed $8.2 million in major repairs to the tunnel, including rebuilding the badly eroded floor. The Corps also inspects the tunnel most years, but the check was skipped this spring because the water flow was too heavy.

The shortfalls of the system are evident during heavy storms.

Trees and boulders the size of small cars wash through the tunnel from the glacier-fed creek, which formed the fan-shaped sediment deposit on which the town was built in the early 1900s. Even with the help of city excavators, the deluge gushing from the tunnel has damaged nearby structures in recent years, including a shellfish hatchery.

In 2006, the overflow pushed muddy water and sand three-feet deep into the Alutiiq Pride Shellfish Hatchery, wiping out the entire stock. In response, pumps and electrical equipment were elevated in case of another flood, said hatchery director Jeff Hetrick. Another storm in 2012 caused less damage, but more than a foot of water still got in.

"The amount and volume of water and debris that comes down that waterfall in a rain event is pretty humbling," Hetrick said.

Sitting near the tunnel's entrance, Providence Seward Medical and Care Center has developed a detailed response plan, including evacuation details, in case floodwaters ever breach the dam.

"It's always on our minds," said Lila Hurst, the hospital's emergency management coordinator.

Some local residents downplay the danger, in part because it's been discussed for so long, but officials believe their concerns are justified. Finding a solution has been difficult, even as millions of dollars have been spent on maintenance and repairs over the decades.

The Corps of Engineers' study of major upgrades is not expected to be completed until 2021. Among the possibilities being considered, the most likely options will be drilling a larger, second tunnel or enlarging the existing one, said Bruce Sexauer, chief of the Corps' Alaska district civil works branch. Congress has not approved money for any construction.

The Corps also is working with the city to develop an emergency action plan for the Lowell Canyon area.

Meanwhile, there are no emergency warning devices for the dam and tunnel complex. A sensor to gather velocity data and other information was installed last year at the tunnel exit, said the city's public works director, Doug Schoessler. But a city worker still must visually monitor the tunnel and dam during storms.