How the progression from crossbows to muskets to tanks will help predict future weapons. 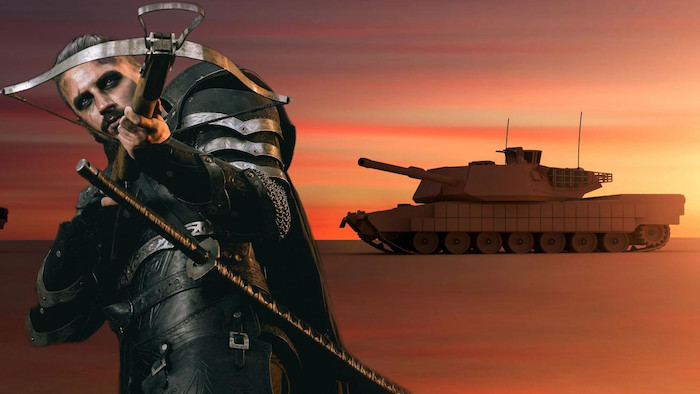 ABERDEEN PROVING GROUND, Md. -- Anticipating the technology and weapon systems of our future Army might not be entirely daunting, new Army research finds.

Trends in the progression of weapon systems from the early crossbowman to a musket to a military tank might help predict our future systems, according to a new study to be published in the Journal of Defense Modeling and Simulation, "Towards Universal Laws of Technology Evolution: Modeling Multi-century Advances in Mobile Direct Fire Systems." 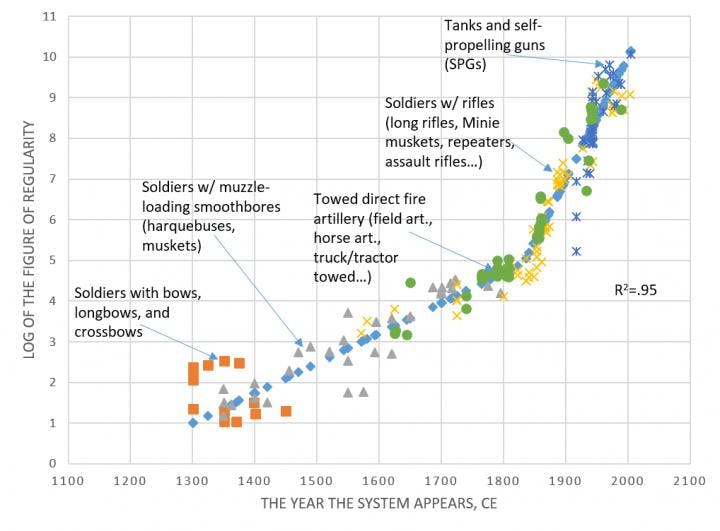 A composite characteristic -- weighted sum of logarithms of military systems' mass, speed, effective range, crew, rate of fire and projectile's kinetic energy -- falls approximately on the same curve for broad range of system types. This occurs in spite of great differences in the systems' physical scale and underlying technologies, for over seven centuries.US Army

"A number of law-like regularities are known to apply to both technological and naturally emerging complex systems," said Dr. Alexander Kott, author of the paper and a researcher at the U.S. Army Combat Capabilities Development Command's Army Research Laboratory. "Identifying these regularities may help long-range technology forecasting, which this paper illustrates by exploring two systems that might appear 30 years in the future."

Certain performance measures of technological systems often exhibit exponential--and sometimes superexponential--pattern of growth over time, Kott said. A particularly well-known example of such a regularity is Moore's Law, which states that a performance measure of a computer chip doubles approximately every two years. Many other technologies follow a similar law of exponential growth.

So-called allometric relations are another class of law-like regularities. Often, a universal relation exists between the scale of the organism and its various attributes, applicable across multiple organisms of widely different scales, Kott said. For example, the Kleiber's Law states that for the vast majority of animals--from tiny mouse to huge elephant--the organism's metabolic rate scales approximately to the 3/4 power of the organism's mass, and the data for all such organisms fall on the same curve.

This research explores whether a single regularity of technological growth might apply to technologies of widely different scales, over a period of multiple centuries. Kott investigated a collection of diverse weapon systems he describes as the mobile direct-fire systems. These include widely different families of technologies that span the period of 1300-2015 CE: Soldiers armed with weapons ranging from bows to assault rifles; foot artillery and horse artillery; towed anti-tank guns; self-propelled anti-tank and assault guns; and tanks. 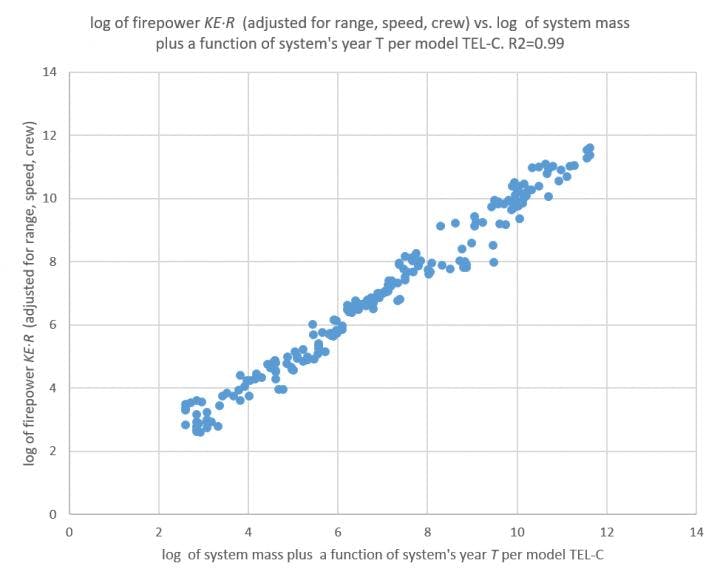 A composite characteristic of widely different military systems, from a medieval bowman to a modern tank, falls approximately on a straight line over a wide range of physical scales and historical periods (1300-2015 CE). The ordinate is a weighted sum of logarithms of a military system's rate of fire, projectile's kinetic energy, speed, effective range, and crew size. The abscissa combines the logarithm of a system's mass and a piecewise linear function of the time when the system appeared.US Army

Ultimately, this research finds that, indeed, a single, uncomplicated regularity describes the historical growth of this extremely broad collection of systems. Multiple, widely different families of weapon systems--from a bowman to a tank--fall approximately on the same curve, a simple function of time.

"To my knowledge, no prior research describes a regularity in the temporal growth of technology that covers such widely different technologies, of widely different physical scales, and over such a long period of history," Kott said. "However, such a regularity should be taken with a degree of caution. You cannot use it as a design guide. There is a lot more to a good system than a very parsimonious figure of performance we use in our model. Interpretations of the model require care."

This research suggests a possibility that even broader collections of technology families might evolve historically in accordance with what might be called universal laws of technological evolution, and provides related research questions for further investigation.

"What I find interesting about the findings of this paper," said Dr. Bruce West, the U.S. Army's chief mathematician, "is that from the evolutionary allometric perspective, this is the first set of empirical data that demonstrate the existence of a strongly time-dependent allometric coefficient. I anticipated such time dependency in my earlier papers, and here is a clear empirical confirmation."

Kott muses about this law-like but previously unrecognized trend.

"In hindsight," he said, "this multi-century, multi-scale regularity may not be all that surprising, but somehow nobody noticed this previously. Perhaps, the future is not a silent mystery. It speaks to us from the past, softly."