India Agrees to $5B Air Defense Deal with Russia

The agreement came despite a looming threat of U.S. sanctions on countries that trade with Russia's defense and intelligence sectors. 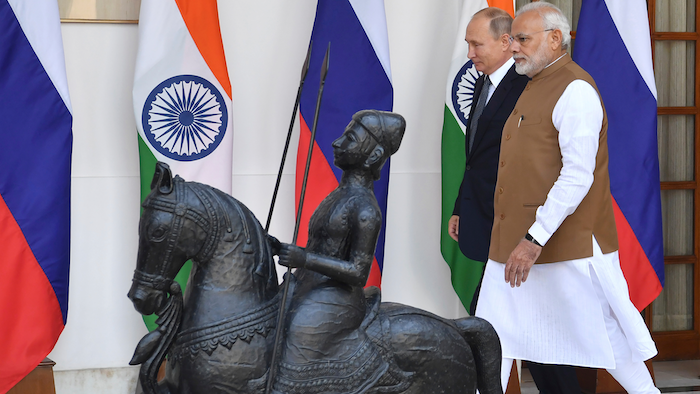 India signed a $5 billion deal to buy five Russian S-400 air defense systems on Friday despite a looming threat of U.S. sanctions on countries that trade with Russia's defense and intelligence sectors.

The deal was signed in New Delhi during a visit by Russian President Vladimir Putin, who met with Indian Prime Minister Narendra Modi to discuss nuclear energy, space exploration and trade.

India has requested that the U.S. grant it a waiver for the deal from sanctions prescribed by the Countering America's Adversaries Through Sanctions Act, a U.S. law passed in August 2017 that is intended to punish Russia for its annexation of Crimea and alleged interference in the 2016 U.S. elections.

The U.S. did not spare China from sanctions last month for purchasing its own Russian S-400 surface-to-air missile systems and fighter jets.

If the U.S. does impose sanctions on India, it is unclear how India could pay Russia for the military equipment, since the law bars dollar-denominated financial transactions.

Vladimir Sotnikov, a foreign affairs expert at an independent research institute in Moscow, believes India could make the payment in a mixture of rupees and dollars to try to circumvent the sanctions.

"I do not think that India would succumb to U.S. pressure over the purchasing of the armaments from Russia," he said. "India has a very sophisticated policy of separating the relationship between India and the U.S. and India and the Russian Federation. And India is in a good negotiating position right now."

The National Security Council at the White House said in a statement that the Trump administration urges all "of our allies and partners to forgo transactions with Russia that would trigger sanctions" under the act, known as CAATSA.

"The administration has indicated that a focus area for the implementation of CAATSA Section 231 is new or qualitative upgrades in capability - including the S-400 air and missile defense system. Our recent action to sanction a Chinese government entity for an S-400 delivery underscores the seriousness of our resolve on this issue."

Officials with India's external affairs and defense ministries confirmed the deal was signed after Putin and Modi made no reference to it during a news conference following their talks.

An 11-page joint statement made only passing mention, saying that "the two sides welcomed the conclusion of the contract."

The deal will likely bolster the close relationship between India and Russia that dates back to the Cold War, when the U.S. tilted toward Pakistan, India's neighbor and archrival. But it is also likely to strain ties with Washington.

India is the world's largest importer of military hardware, according to Mumbai-based think tank Gateway House, and has depended on Russia for political support as well as billions of dollars in military hardware. Nearly 70 percent of India's present-day defense equipment was procured from Russia, according to India's Defense Ministry.

India's acquisition of the S-400 long-range missile systems has been considered critical to countering a perceived threat from China, which is increasingly making economic inroads throughout South Asia, India's traditional sphere of influence, according to military experts.

India has also developed closer defense ties to the U.S. in recent years with joint military drills and defense sales.

India has signed more than $15 billion in U.S. defense contracts since 2008, including for C-130J and C-17 transport aircraft, P-8I maritime patrol aircraft, Harpoon missiles and Apache and Chinook helicopters.