Group Accuses US, Russia of Blocking Consensus on ‘Killer Robots'

U.N. Secretary-General Antonio Guterres welcomed the principles and expressed hopes the countries who signed on "can build upon this achievement." 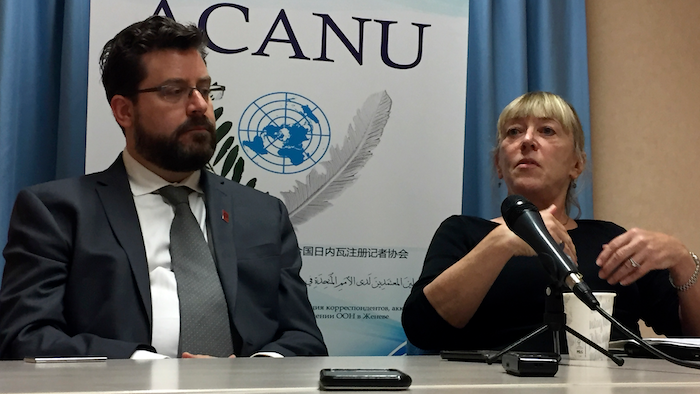 In this Monday, Aug. 27, 2018 file photo, Peter Asaro, left, of the International Committee for Robot Arms Control, and Jody Williams of the Nobel Women's Initiative speak to reporters at a news conference in Geneva, Switzerland.
AP Photo/Jamey Keaten, file

A key opponent of high-tech, automated weapons known as "killer robots" is blaming countries like the U.S. and Russia for blocking consensus at a U.N.-backed conference, where most countries wanted to ensure that humans stay at the controls of lethal machines.

Coordinator Mary Wareham of the Campaign to Stop Killer Robots spoke Monday after experts from dozens of countries agreed before dawn Saturday at the U.N. in Geneva on 10 "possible guiding principles" about such "Lethal Automated Weapons Systems."

Point 2 said: "Human responsibility for decisions on the use of weapons systems must be retained since accountability cannot be transferred to machines."

Wareham said such language wasn't binding, adding that "it's time to start laying down some rules now."

U.N. Secretary-General Antonio Guterres welcomed the principles and expressed hopes the countries who signed on "can build upon this achievement," according to a statement from his spokesman.

Wareham said delegates had just "kicked the can down the road" until the next meeting on LAWS in November. The "usual suspects" including the United States, Russia, Israel and South Korea — joined unexpectedly by Australia, she said — were behind an effort to keep the text from being more binding.

"The fact is that it's the majority that wants it, but you know, it's the Convention on Conventional Weapons — and this is where, it's about consensus and ... a small minority of states — or even a single one can hold back the desires of the majority," Wareham said.

Amandeep Gill, an Indian diplomat who chaired last week's meeting of experts, expressed satisfaction about the outcome, while cautioning that such systems should not be "anthropomorphized," or attributed with human qualities. He insisted that they were not like "Iron Man and Terminator."