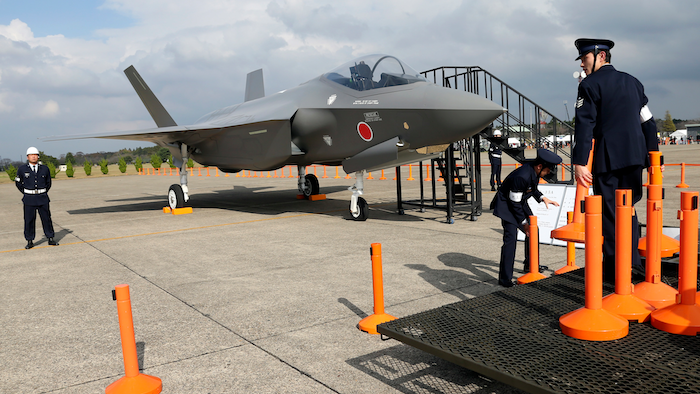 In this Oct. 26, 2014, file photo, Japan Air Self-Defense Force crew members set up cordons to protect a mockup of the F-35 fighter jet during the annual Self-Defense Forces Commencement of Air Review at Hyakuri Air Base, north of Tokyo.
AP Photo/Eugene Hoshiko, File

Japan's Defense Ministry is seeking to more than double spending on missile defense, including purchases of costly American arsenals, to defend against North Korean threats.

The record-high 5.3 trillion yen ($47 billion) request for fiscal 2019, approved Friday by the ministry, is up 2.1 percent from last year. The military spending has risen seven consecutive years under Prime Minister Shinzo Abe.

The request related to missile defense rises to 424 billion yen ($3.8 billion) from about 180 billion yen last year. The overall government budget plan is to be submitted for Cabinet and parliamentary approval later this year.

The final budget could still grow because the request leaves out spending to reduce Okinawan communities' burden of hosting many of 50,000 American troops stationed on the southern island and a relocation cost for some troops to the U.S. Pacific territory of Guam.

A big chunk would buy a pair of land-based Aegis missile defense systems and a ship-to-air SM-3 Block IIA interceptor with an expanded range and accuracy developed jointly by the U.S. and Japan, as well as upgrading of fighter jets and destroyers to make them compatible with advanced interceptors.

Japan has pushed harder to upgrade and bolster its missile and strike-back capability, citing North Korea's nuclear and missile threat. The Defense Ministry, in an annual military review released this week, emphasized the need to further strengthen missile defenses because North Korea hasn't taken concrete steps to denuclearize despite its pledge to do so.

Opposition to Japan's big spending on missile defense has risen since Pyongyang suspended missile tests this year as it made diplomatic overtures to the U.S. and South Korea. Japan's use of U.S. weapons is beneficial to its alliance with Washington, but opponents say it benefits American arms industry but not struggling Japanese makers.

In the budget request, Japan's U.S. arms purchases under the Foreign Military Sales program would jump 70 percent from last year to a record 692 billion yen ($6.2 billion).

Japan currently has a two-step missile defense system — interceptors on destroyers in the Sea of Japan, and if they fail, land-to-air mobile PAC-3s. Technically, the current setup can deal with falling debris or missiles fired at Japan, but is insufficient for high-altitude missiles or multiple attacks, experts say.

A pair of land-based Aegis systems can cover entire Japan and multiply missile defense, experts say. It would cost 100 billion yen ($900 million) more than an earlier estimate as Japan chose Lockheed Martin's expensive LMSSR radar, said to be capable of shooting down cruise and other missiles on high-altitude trajectory.

It would take about six years for the system to become operational, defense officials said. It could also take longer as the plan faces opposition from many residents at intended deployment sites — Akita in northern Japan and Yamaguchi in the southwest.

North Korea has tested more than 40 missiles since 2016 alone, including some intercontinental ballistic missiles over or landing near Japan, and has deployed several hundred shorter-range missiles capable of hitting the country. The defense paper says Pyongyang likely has made miniaturized nuclear warheads it can place atop ballistic missiles, an advancement of its nuclear capability that North Korea has claimed to have achieved.

Japan is currently updating its national defense guidelines and a medium-term defense program, expected at the end of the year, to reflect North Korea's threat. Japan also sees China's growing military spending, modernization of equipment and assertiveness in regional seas as security concern and has stepped up amphibious capabilities to defend disputed islands in the East China Sea.

In the face of China's rising air force capability, the ministry requested 54 billion yen ($480 million) to upgrade F-15 fighters so they can carry more ammunition, including cruise missiles, and to increase their electronic warfare capability. It also sought 92 billion yen ($820 million) for six F-35 stealth fighters and 14 billion yen ($125 million) for the research of a new high-speed arsenal to defend Japanese remote islands.

The budget request includes 93 billion yen ($830 million) in space and cyber defense, including purchasing of deep space surveillance radar and scaling up of a cyber-defense unit.

"The security environment surrounding Japan has turned more severe and uncertain at a much faster pace than we anticipated five years ago, when we set the current guidelines," Abe told Wednesday's meeting of a government-commissioned panel on new guidelines, which he said should include space and cyber defenses.