Terry Branstad also said issues with China's handling of the virus should be addressed later. 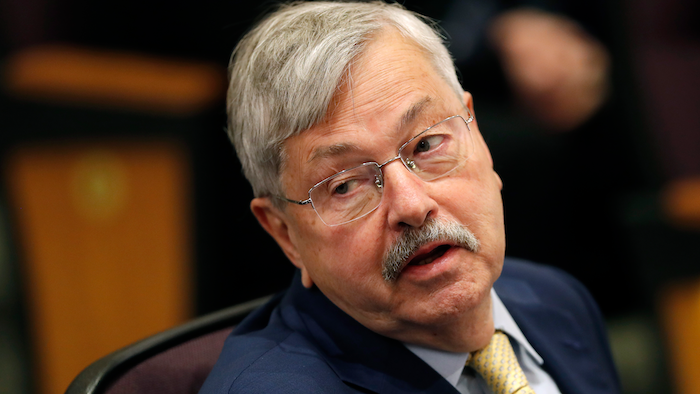 BEIJING (AP) — The U.S. ambassador to China said Wednesday that he doesn’t believe Beijing is deliberately blocking exports of masks and other medical supplies to fight the coronavirus, and that the shipment of 1,200 tons of such products to the U.S. could not have been possible without Chinese support.

Ambassador Terry Branstad also said the U.S. has concerns about how China initially handled the virus outbreak in the central city of Wuhan, but that such issues should be addressed after the pandemic has been brought under control.

Chinese officials are believed to have delayed reporting the outbreak for several crucial days in January due to political concerns, allowing the virus to spread further.

Despite working with half their normal staff, U.S. diplomats and local employees in China have been able to facilitate 21 flights of supplies on behalf of the U.S. Federal Emergency Management Agency, along with multiple private chartered flights, Branstad said.

He said there had been a slowdown in the provision of supplies, but that it appeared to be caused by China's implementation of stricter quality standards following complaints it was sending shoddy equipment abroad.

“We have been able to solve several problems. We’re just trying to find a workable way to get it done," Branstad said, adding that a March 27 telephone conversation between President Donald Trump and his Chinese counterpart, Xi Jinping, had been “really helpful.”

“We always remind them of the leaders’ commitment to work together to address these issues,” the ambassador said.

“I feel good about it and I feel that, yes, they want to enforce their laws and regulations ... we’re trying to say let’s use some common sense in doing this and if it’s Food and Drug Administration approved and companies like 3M have already been shipping these things to the United States, it doesn’t make sense to hold them up when we feel confident that it meets the quality requirements that we have."

Shipments to the U.S. began after China's own demand for such gear fell in recent weeks, alongside a sharp decline in its number of new cases and a gradual rise in people declared cured and released from hospitals.

China reported 46 new virus cases on Wednesday, 36 of them from overseas. Of the 10 domestic cases, eight were in the province of Heilongjiang that borders on Russia where authorities have been rushing to stem a new outbreak among those traveling back to China.

It said almost 1,100 people were also under quarantine as suspected cases or for having tested positive for the virus without showing symptoms. China says it has recorded a total of 3,342 deaths among 82,295 cases.

Earlier, American diplomats evacuated the consulate in Wuhan and organized charter flights to bring out U.S. citizens. Worldwide, the state department has organized the return of about 60,000 U.S. citizens from more than 100 countries.

Chinese cooperation both in providing antivirus supplies and implementing the first phase of a trade deal aimed at ending disputes over tariffs and intellectual property may actually help ease friction between the world's two largest economies, said Branstad, a former long-term governor of the important agricultural state of Iowa.

“I am hopeful that because of the collaboration and work on fighting the virus, and also of course the phase one of the trade agreement, that there will be a better relationship going forward," Branstad said.

“We’re two big countries, the two biggest economies in the world. Our systems are very different and there's always going to be certain areas of tension and conflict," he said.

While saying that the two sides should not engage in political sniping, Branstad criticized a tweet by Chinese foreign ministry spokesman Zhao Lijian on March 12 which said: “It might be US army who brought the epidemic to Wuhan. Be transparent! Make public your data! US owe us an explanation!”

Zhao provided no evidence and the comment prompted the State Department to summon China's ambassador to protest.

Branstad said Zhao's comment was “really outrageous and counterproductive from the Chinese perspective because there’s no credibility with that and that was unfortunate.”

China has said the tweet did not constitute an official statement.

“I think we’ve moved beyond that and are focusing on the future and on cooperation," Branstad said.