Reports suggested the U.S. government was interested in acquiring the firm. 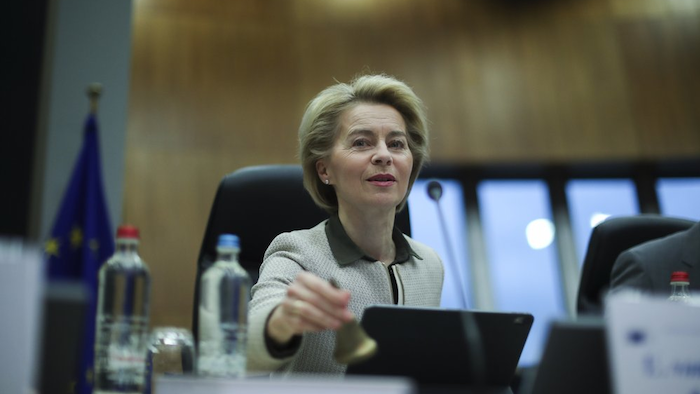 BERLIN (AP) — The European Union on Monday announced a multimillion-dollar investment in a German company that is working on a potential vaccine for the new coronavirus amid reports that the U.S. government was interested in acquiring the firm.

The funding is part of a coordinated EU response to COVID-19, making use of public and private funding to support research, the European Commission said. COVID-19 is the name for the disease caused by the new coronavirus.

“I am proud that we have leading companies like CureVac in the EU,” said European Commission President Ursula von der Leyen, Germany's former defense minister. “Their home is here, but their vaccines will benefit everyone, in Europe and beyond.”

The EU's executive body did not mention possible American interest in CureVac but said it will provide up to 80 million euros ($89.4 million) in support so that it can “scale up development and production of a vaccine against the coronavirus in Europe.”

CureVac on Monday denied reports that the U.S. government was acting to acquire it.

“CureVac has not received from the U.S. government or related entities an offer before, during and since the task force meeting in the White House on March 2,” the company said on Twitter. The company's then-chairman had met with President Donald Trump at the White House as part of a discussion with numerous pharmaceutical executives.

Amid multiple reports that Trump was offering the firm a large amount of money to secure its work for the U.S., the White House said it was unaware of such “underlying information.”

Chancellor Angela Merkel deflected a question on CureVac, referring to the company's statement. But before CureVac's tweet, Merkel's chief of staff, Helge Braun, told the Bild daily that German officials had “very intensive contact” with CureVac over the past two weeks “when there were thoughts of enticing it to the United States.”

Braun said the company would get the support it needs to develop a vaccine as quickly as possible for use in Germany and around the world.

Germany's interior minister, Horst Seehofer, said at a news conference Sunday that he had heard repeatedly from German government members that reports of U.S. interest in CureVac were true.

Richard Grenell, the U.S. ambassador to Germany, tweeted that the story "was wrong.”

A spokeswoman for Germany's economy minister said Monday that any new vaccine “must be available for everyone, and this cannot be about exclusivity.”

For most people, the coronavirus causes only mild or moderate symptoms, such as fever and cough, and they recover fully. For some, especially older adults and people with existing health problems, it can cause more severe illness, including pneumonia.