Two brothers had hoped to resell them for profit amid the coronavirus outbreak. 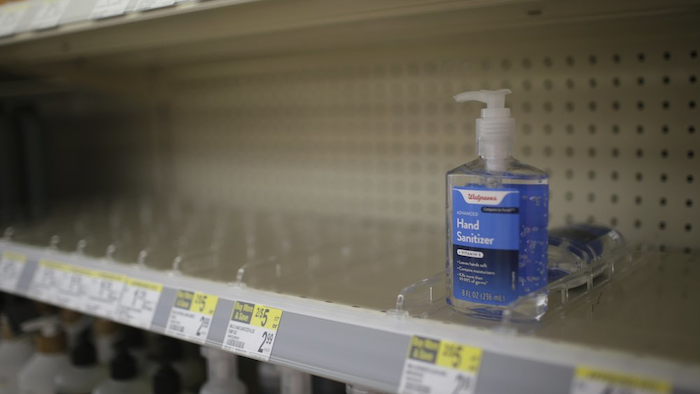 Thousands of bottles of hand sanitizer and packs of antibacterial wipes and medical masks have been donated after a failed attempt by two Tennessee brothers to resell them for profit during the U.S. coronavirus outbreak.

Boxes were taken Sunday from a storage unit and the home of Matt Colvin of Hixson, Tennessee, news outlets reported. The items, including 17,700 bottles of hand sanitizer, were donated to a local church and some supplies will head to Kentucky where Colvin had cleared store shelves.

Colvin and his brother, Noah Colvin, had cleared store shelves of the items before online retailer Amazon stopped their sales and the state attorney general sent a cease-and-desist letter.

The purchases were first featured in a story in The New York Times in which the brothers drove to stores scooping up supplies around Chattanooga, Tennessee, on March 1, the day after the first U.S. coronavirus death was announced.

Noah Colvin then drove 1,300 miles (about 2,100 kilometers) over three days across Tennessee and Kentucky, filling a rented truck while his brother stayed home preparing for more supplies he had ordered.

Matt Colvin said he posted 300 bottles of hand sanitizer for sale on Amazon between $8 and $70 each and immediately sold them all.

“It was crazy money,” he told the newspaper.

The next day, Amazon pulled Matt Colvin's items along with thousands of other similar listings, citing price gouging. Some of the sellers behind the listings were suspended, while EBay soon banned U.S. sales of sanitizers and masks.

Matt Colvin had turned Amazon sales into a six-figure career starting in 2015, advertising Nike shoes and pet toys and by following popular trends.

In early February, when the coronavirus was spreading in China, the former Air Force technical sergeant bought 2,000 “pandemic packs” from a local liquidation firm that were left over from a defunct company. He bought them at $3.50 per pack and resold them at a substantial profit.

When public demand for sanitizers and wipes started to skyrocket, Matt and Noah Colvin went to work buying them up.

Tennessee Gov. Bill Lee declared a state of emergency on Thursday. Part of that included the triggering of an anti-price gouging law.

“We will not tolerate price gouging in this time of exceptional need, and we will take aggressive action to stop it,” Tennessee Attorney General Herbert H. Slatery III said in a statement Saturday night.

The case involving the Colvins remains under investigation.

Kentucky Attorney General Daniel Cameron added that “this is a time where we have to focus on helping our neighbors, not profiting from them.”