The order would insist on American-made supplies and pharmaceuticals amid a virus outbreak. 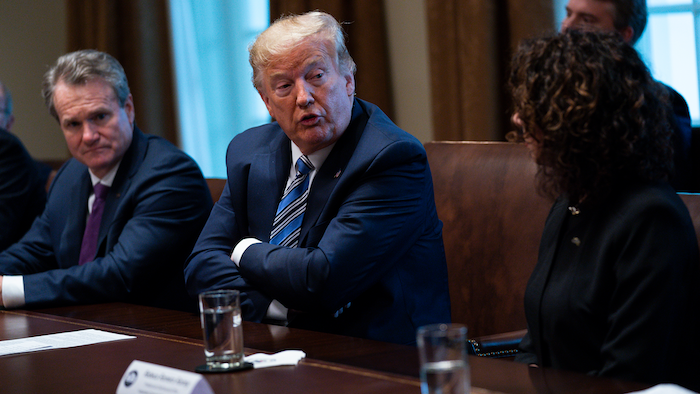 WASHINGTON (AP) — President Donald Trump is expected to announce an executive order insisting on American-made medical supplies and pharmaceuticals in response to the coronavirus outbreak, according to a person familiar with the plan, as the White House begins to come to grips with the severity of the situation.

Word about the planned announcement, from a person who was not authorized to publicly discuss the matter and spoke on condition of anonymity, comes amid tumult Wednesday in the unfolding crisis. Confirmed cases in the United States are topping 1,000, fluctuations in the financial markets are continuing and Washington is straining to respond.

The White House is also considering a host of more aggressive responses to free up additional federal dollars and to address concerns that the administration's initial response to the pandemic was insufficient.

In one order Trump issued Wednesday, he authorized Health and Human Services Secretary Alex Azar to take whatever steps are necessary to allow doctors and nurses to use masks made for industrial use while those made specifically for health care are in short supply. Companies have been seeking legal cover for that.

“Those industrials will work for medical,” said House Minority Leader Kevin McCarthy. “We can just do that for an 18-month period and there'd be millions more available."

The vast majority of people recover from the new virus. According to the World Health Organization, people with mild illness recover in about two weeks, while those with more severe illness may take three weeks to six weeks to recover. In mainland China, where the virus first exploded, more than 80,000 people have been diagnosed and more than 58,000 have so far recovered.

Sen. Marco Rubio, R-Fla., raised concerns about diversifying the supply chain and reducing the U.S. reliance on imports, including from China, during a private lunch with Trump and GOP senators this week.

Trump appeared to agree with the senator's outlook, according to a person familiar with the matter who was not authorized to publicly discuss the private session and spoke on condition of anonymity.

He called the expected order “a very strong first step toward increasing domestic production by enforcing Buy American requirements for pharmaceuticals and medical supplies, as well as fast-tracking approval” by the Food and Drug Administration of "critical products impacted by the coronavirus outbreak’s strain on the supply chain.”

China is a key supplier of drug active ingredients, the chemical components that make drugs work, and finished medicines for the U.S. market. Those include the active ingredients for antibiotics and pills to treat common chronic conditions such as heart disease.

Many of China’s active ingredients are shipped to India, which makes much of the global supply of generic drugs. India recently restricted all exports of 13 active pharmaceutical ingredients, and finished drugs made from those chemicals, to protect its domestic drug supply.

The restricted drugs are mostly antibiotics, antiviral drugs and a fever reducer, all of which are used for supportive care of patients with coronavirus symptoms, because there is no approved medicine to treat the virus. U.S. regulators have stressed that other medicines are available to treat patients.

Members of Congress and others since last fall have been raising concerns that the U.S. has become much too dependent on medicines made in Asia, as U.S. and European drugmakers increasingly have outsourced much of their manufacturing to Asia, where labor and materials are far cheaper.