Hypodermic needles could be replaced by tiny needles that mimic parasites. 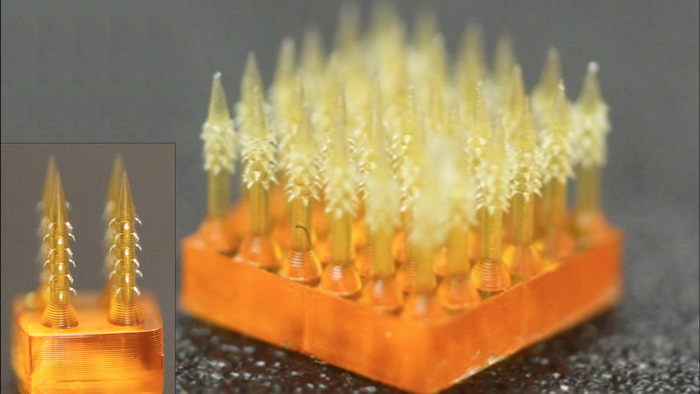 Painful hypodermic needles may not be needed in the future to give shots, inject drugs and get blood samples.

With 4D printing, Rutgers engineers have created tiny needles that mimic parasites that attach to tissues and could replace hypodermic needles, according to a study in the journal Advanced Functional Materials.

While 3D printing builds objects layer by layer, 4D goes further with smart materials that are programmed to change shape after printing. Time is the fourth dimension that allows materials to morph into new shapes.

"We think our 4D-printed microneedle array will allow for more robust and sustained use of minimally invasive, pain-free and easy-to-use microneedles for delivering drugs, healing wounds, biosensing and other soft tissue applications," said senior author Howon Lee, an assistant professor in the Department of Mechanical and Aerospace Engineering in the School of Engineering at Rutgers University-New Brunswick.

Microneedles (miniaturized needles) are gaining attention because they are short, thin and minimally invasive, reduce pain and the risk of infection and are easy-to-use. But their weak adhesion to tissues is a major challenge for controlled drug delivery over the long run or for biosensing, which involves using a device to detect DNA, enzymes, antibodies and other health indicators.

In nature, some insects and other organisms have developed microscopic features that adhere to tissue, such as the microhooks of parasites, barbed stingers of honeybees and scaled quills of porcupines. Inspired by these examples, Rutgers engineers developed a microneedle that interlocks with tissue when inserted, enhancing adhesion. They combined a micro 3D-printing technique and a 4D-printing approach to create backward-facing barbs on a microneedle.

Using chicken muscle tissue as a model, the researchers showed that tissue adhesion with their microneedle is 18 times stronger than with a barbless microneedle. Their creation outperforms previously reported examples, resulting in more stable and robust drug delivery, collection of bio-fluids and biosensing, the study says.