Opening arguments are scheduled for Monday, with two county governments arguing that the companies engaged in a conspiracy that ravaged their communities. 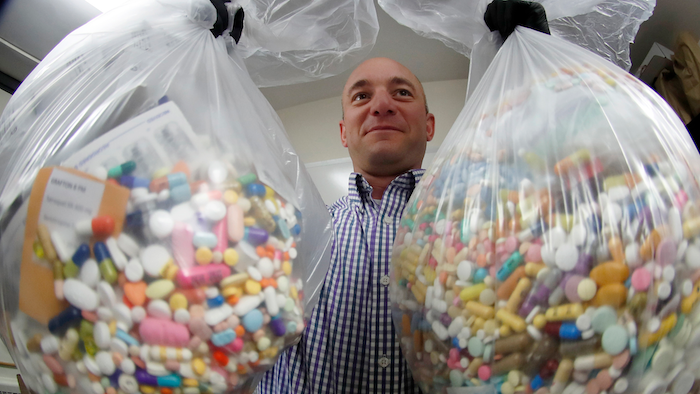 CLEVELAND (AP) — A jury was seated Thursday for the first federal trial on the opioid crisis, but the push to settle the case before opening arguments next week continued, with company officials expected to gather for further talks.

U.S District Judge Dan Polster had ordered executives for the companies that are defendants to appear in Cleveland on Friday for continued negotiations, a person with knowledge of the negotiations told The Associated Press. The person was not authorized to disclose information about ongoing negotiations and spoke on the condition of anonymity.

The drug distribution companies AmerisourceBergen, Cardinal Health and McKesson — and manufacturers Teva and Johnson & Johnson — have the outlines of a settlement to thousands of opioid-related lawsuits that could be worth $50 billion over time.

Under the proposed terms, which could change, the three distributors would pay a total of $18 billion over 18 years; Johnson & Johnson would chip in $4 billion over time; and Teva would contribute an estimated $15 billion worth of overdose antidotes and treatment drugs.

An additional $14 billion would come from distribution of those drugs, based on calculations of how much a distributor could charge for them, according to people with knowledge of the deal who were not authorized to disclose information and spoke on the condition of anonymity.

The deal is being worked out with a group of state attorneys general. Samantha Fisher, a spokeswoman for the Tennessee attorney general's office, confirmed a $50 billion settlement framework that was first reported by The New York Times.

The settlement, if finalized, would apply to more than 2,000 lawsuits across the country. But the pressure of a more limited federal trial is a key in the push toward striking a deal.

All three distributors and two Teva subsidiaries are among the defendants in the Cleveland trial on claims of Ohio's Cuyahoga and Summit counties.

Johnson & Johnson was in the case before settling earlier this month in a deal worth more than $20 million. Three other drugmakers also settled with the Ohio counties. A fourth, OxyContin maker Purdue Pharma, is trying to reach a settlement of all opioid lawsuits through bankruptcy court.

Distributor Henry Schein and the Walgreens pharmacy chain are also in the Cleveland case but have not been reported to be part of a bigger settlement.

Polster, for the second day in a row, denied a request Thursday from defendants to delay the trial because of reports of a settlement offer.

The jury was seated in less than two days despite a challenge of picking from a pool from counties in the Cleveland area that have been hard hit by the opioid crisis. Federal data shows that from 2006 through 2012, the area received more doses of opioids per person than the national median.

Counting both strong prescription painkillers and drugs such as heroin and illicit fentanyl, opioids have been linked to more than 400,000 deaths in the U.S. since 2000.