Researchers from the University of Washington hope future medical devices could monitor themselves. 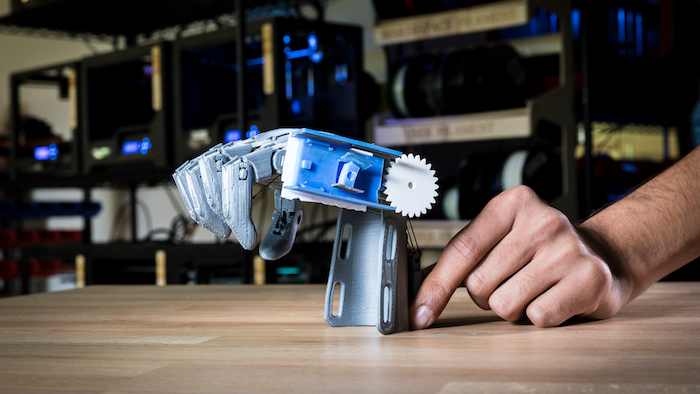 A newly developed antenna system could one day allow 3D-printed medical devices to automatically keep track of how they’re used by patients.

University of Washington researchers previously enabled printed plastics to connect to the internet through a process known as “backscatter.” A gear incorporated into a plastic container could, for example, signal laundry detergent use to an outside antenna — and automatically indicate when more detergent needs to be ordered.

In a new study, the research team embedded a gear that could move in two directions, such as when a pill bottle is opened and closed. The gear would send a signal to one of two antenna, depending on which way it moves, to tally when a patient is taking medication.

Similar methods could be used to monitor levels in an insulin pen or distinguish how people use printed prosthetics.

Because the technique doesn’t use batteries or electronics, the power supply doesn’t run down and it can get wet — a particularly important feature for medical devices.

More importantly, engineers said the system could essentially turn plastic printed by off-the-shelf 3D printers into smart devices. An insulin pen, for example, was outfitted to ensure it tracked how many times it was used even when not connected to a WiFi signal; once it was back in range, that data was uploaded to the cloud.

“This system will give us a higher-fidelity picture of what is going on,” said Washington computer scientist Jennifer Mankoff.

The researchers will present their findings next week at a symposium in Berlin.