Prosecutors said the former GlaxoSmithKline researcher was involved in a scheme to set up companies in China. 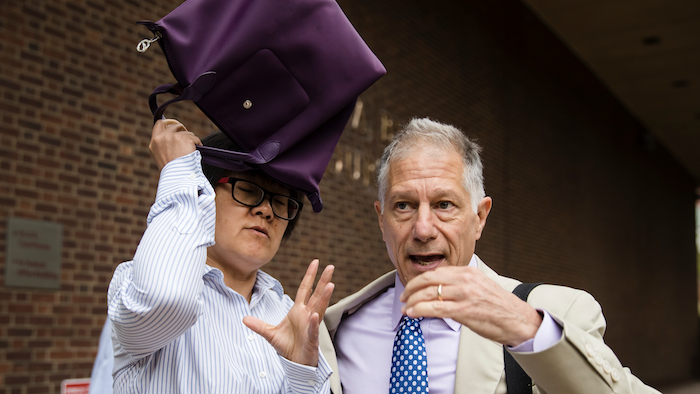 Yu Xue, left, accompanied by her attorney Peter Zeidenberg attempts to block her face with her bag as they exit the federal courthouse in Philadelphia, Friday, Aug. 31, 2018.
AP Photo/Matt Rourke

A cancer researcher pleaded guilty Friday to conspiring to steal biopharmaceutical trade secrets from GlaxoSmithKline in what prosecutors said was a scheme that involved plans to set up companies in China to market them.

Yu Xue entered a guilty plea in federal court to a single conspiracy count. The government dropped more than two dozen other pending counts against the researcher.

In court Friday, Xue said she didn't understand that the material she was emailing to her private account and then to others— including portions of her own patent application for certain research— was considered trade secrets.

Judge Joel Slomsky noted that prosecutors did not have to prove that she understood it was a trade secret, but that she knew she was sharing confidential materials. Slomsky said he believed federal prosecutors had met that burden of proof.

Prosecutors have described the 48-year-old U.S. citizen as one of the top protein biochemists in the world. She had worked at GlaxoSmithKline's research facility in suburban Philadelphia for about a decade and had become a senior manager. She was fired shortly after charges were brought against her in early 2016.

Prosecutors had accused her of downloading and emailing confidential information including research on specific cancer drugs and working with four others, including two people in China, charged in connection with the scheme.

Another research scientist at GlaxoSmithKline, Tao Li, was also charged in the scheme. She has a change of plea hearing scheduled before the court in a few weeks, but it was unclear if she would be pleading to the same charge as Xue.

Slomsky set a sentencing hearing for Dec. 18, but agreed to hold an evidentiary hearing prior to that date that will largely focus on the difference between prosecutors' and defense attorneys' arguments about how serious the crime was and how much potential financial damage was caused.

Xue is facing up to 10 years in prison and a $250,000 fine. She could also be forced to pay restitution for the value of those secrets, which would be capped at $2 billion.

"There are vast differences between the parties as to the value and importance of the information stolen," Assistant U.S. Attorney Robert Livermore said.

Federal prosecutors have had to drop charges or withdraw cases in several other high-profile trade secret cases in recent years, including that of Temple University professor Xiaoxing Xi, who was accused of stealing sensitive technology involving superconductivity in 2015. Charges were dropped when investigators realized the information shared did not amount to trade secrets.