The pair successfully got Apple to replace some 1,500 counterfeit devices with the genuine article, then shipped them to China to be sold for a profit.

Sooner or later, every single one of us is going to fall victim to some sort of bait and switch. One day, that Nigerian prince email is gonna catch you on the wrong day.

And just because you’re Apple — a multi-billion dollar global tech pioneer — it doesn’t mean you’re immune to getting scammed.

As reported first by The Oregonian, two engineering students are being accused of hustling Apple out of nearly $1 million after conducting a counterfeit iPhone replacement scheme.

Yangyang Zhou and Quan Jiang were in the U.S. on student visas, and orchestrated a scam where they shipped counterfeit iPhones from their native China and then returned them to Apple, saying they didn’t work. In accordance with Apple’s warranty program, they were provided with new, authentic devices, which they shipped back to China to be sold for a profit.

A report on ZD Net said that while Apple’s technicians detected some of the fakes, it was tough to ID them when they wouldn’t turn on. Therefore, nearly 1,500 devices were successfully replaced with the real thing, netting these two fraudsters a tidy sum of money that was being funneled back to them via wire transfers from the mother of one of the accused.

Apple sent a cease-and-desist letter in 2017, which was ignored, and the duo was eventually officially caught when U.S. Customs seized some suspicious looking shipments with Apple logos.

Sorry about this, Apple ... though, I think you’re going make it. 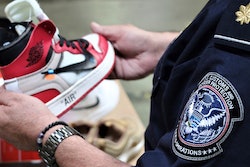