A top executive had characterized the proposal as the company’s "last chance" to fix its brand. 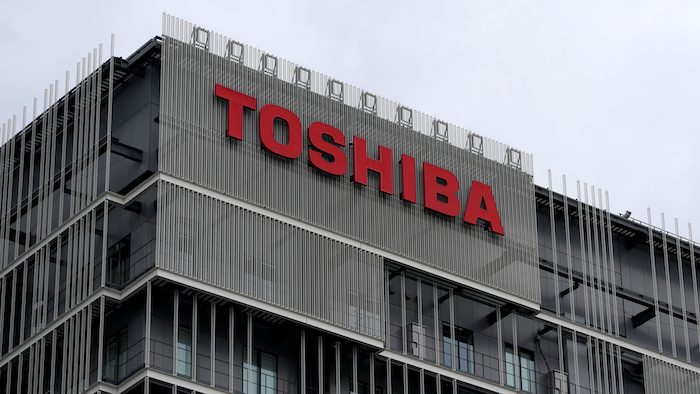 TOKYO (AP) — Shareholders of embattled Japanese electronics and energy giant Toshiba Corp. voted down a major restructuring plan on Thursday, in a setback for the company's management.

The plan proposed last month called for splitting Tokyo-based Toshiba Corp. into two companies, one focused on infrastructure and the other on devices. The latter would have been spun off.

Toshiba management had scrapped an earlier proposal for a three-way split and put forward the latest plan, which was put to a vote at Thursday’s extraordinary shareholders’ meeting.

That new plan failed to win a majority of votes, in a huge setback for Toshiba management, which had defended the new plan as less costly and more stable. One top executive had characterized the move as the company’s “last chance” to fix its brand power and win back people’s trust.

Shareholders also rejected a proposal from major shareholder 3D Investment Partners, based in Singapore, asking for a fuller objective review of strategic alternatives, including a buyout.

During the meeting, shareholders, including several who identified themselves as former Toshiba workers, got up and said the restructuring plan wasn’t in the best interests of Toshiba or its employees. Others said splitting a company won’t produce value.

Toshiba management had defended the new plan as less costly and more stable than possible alternatives.

Toshiba’s fortunes have fallen since the March 2011 Fukushima nuclear disaster, when a tsunami in northeastern Japan sent three reactors into meltdowns. Toshiba is involved with the costly and precarious decommissioning effort, which will take decades.

The company’s reputation was also tarnished by an accounting scandal, which involved books being doctored for years.

Kurumatani was replaced by Satoshi Tsunakawa, a veteran at Toshiba, who served as chief executive from 2016. Tsunakawa recently announced his resignation, though he remained as chairman.

Taro Shimada, an executive officer and corporate senior vice president, was tapped as president in an interim move. Shimada was an executive at Siemens, both in Japan and the U.S., before joining Toshiba’s digital operations in 2018.

If approved at a regular shareholders’ meeting in June, Shimada will become Toshiba’s first chief executive with a background in digital technology.

“We will take into consideration the opinions of the shareholders and will continue to study how we can boost the value of our company,” Shimada told shareholders Thursday.

Founded in 1875, Toshiba was a manufacturing pioneer for everything from electric rice cookers to laptop computers. It also invented flash memory, but that division was sold off as its fortunes tumbled.

Toshiba acquired Westinghouse of the U.S. in 2006 with much fanfare, making nuclear power a key part of its business. Westinghouse went bankrupt in 2017, saddling Toshiba with huge red ink at that time. Toshiba sold Westinghouse in 2018.

Toshiba shares, which have recovered in price over the last five years, rose slightly in morning trading.