The span is now the world’s longest suspension bridge. 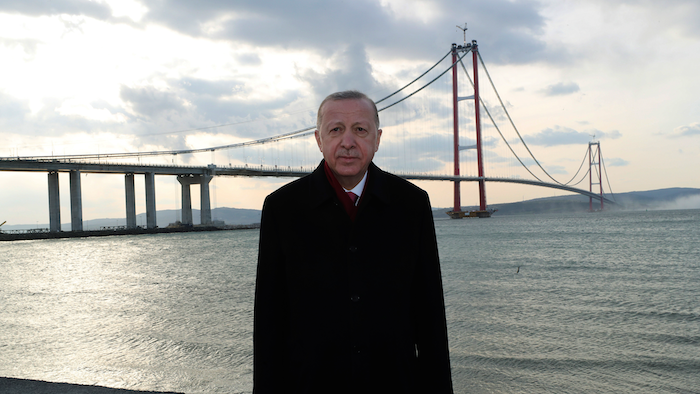 ANKARA, Turkey (AP) — The president of Turkey, South Korea’s prime minister and other officials inaugurated a massive suspension bridge Friday over the Dardanelles Strait that connects the European and Asian shores of the key waterway.

It connects the town of Gelibolu, located in the European side of Turkey's northwestern province of Canakkale, with the town of Lapseki on the Asian side. The bridge allows travelers to cross the Dardanelles — which connects the Aegean Sea with the Sea of Marmara — in just six minutes compared to the previous 1 1/2 hours by ferry, the president said.

“Turkey has overtaken Japan, which has the longest bridge in the world in terms of the midspan, and has taken the first place,” Erdogan said during the inauguration ceremony.

The inauguration was timed to coincide with the 107th anniversary of Turkey’s World War I naval victory over a joint British and French fleet attacking the Dardanelles. The failure of the naval campaign led to the ill-fated 1915 landings on the Gallipoli peninsula by the allies led by Britain and France along with troops from Australia and New Zealand.

“The 1915 Canakkale Bridge will leave this history of collision and conflict behind and will be a bridge between East and West, starting a new era of peace and prosperity,” South Korean Prime Minister Kim Boo-kyum said during the ceremony, in reference to the Canakkale region's historic battlefields.

The bridge, which was build by a consortium of Turkish and South Korean companies, will also strengthen the bonds between Turkey and South Korea, Kim said.

The bridge’s architecture is awash with symbolism. It’s central span of 2,023 meters (6,637 feet) is in recognition of the year 2023, when Turkey celebrates the centenary of the founding of the Turkish Republic following the collapse of the Ottoman Empire, Erdogan said. The height of the bridge’s towers is 318 meters (1,043 feet) — a nod to March 18 (or 3/18) when Turkey commemorates soldiers killed during the Gallipoli sea and land battles.

The World War I Gallipoli campaign aimed to secure a naval route from the Mediterranean Sea to Istanbul through the Dardanelles, and take the Ottoman Empire out of the war. The April 25, 1915 Gallipoli landings marked the start of a fierce battle that lasted for eight months. Around 44,000 Allied troops and 86,000 Ottoman soldiers died in the fighting.