Toshiba CEO Steps Down Amid Restructuring

The restructuring effort aims to restore the storied company's reputation and competitiveness. 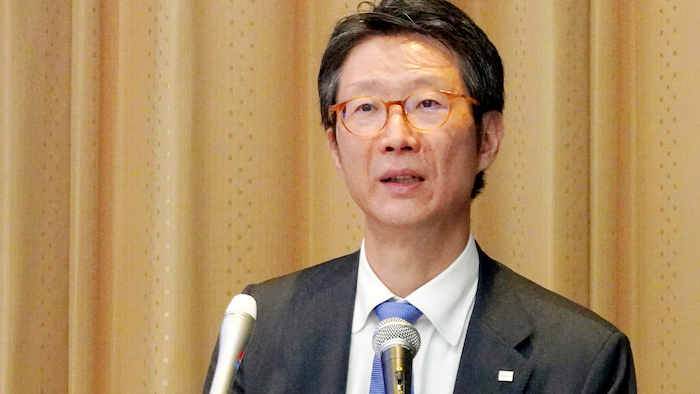 TOKYO (AP) — Japanese technology giant Toshiba has named a new chief executive as it seeks shareholder approval for a restructuring plan aimed at restoring its reputation and competitiveness.

The company said Tuesday that its board had decided Taro Shimada, an executive officer and corporate senior vice president, would replace Satoshi Tsunakawa as chief executive.

Shimada was an executive at Siemens, both in Japan and the U.S., before joining Tokyo-based Toshiba Corp. in 2018, working in its digital operations.

He faces the challenge of leading a restructuring plan that’s drawn criticism from shareholders. In February, Toshiba said it plans to split into two companies, one focused on infrastructure and the other on devices.

Shimada said he takes pride in being the first CEO with a background in digital technology and hopes that will be a plus for Toshiba's energy business.

“I have been at Toshiba for only three years, but I love Toshiba,” he said.

When asked about how he hoped to win over critical shareholders, Shimada said he had learned while working in the U.S. about the importance of communicating as equals, referring to the expression “put yourself in someone else's shoes.”

The restructuring proposal is still subject to shareholder and regulatory approval. An extraordinary shareholders’ meeting is set for March 24, when the plan will be put to a vote. Toshiba officials told reporters the management change was timed to happen before that, although it was unclear how that might help win over shareholders.

Toshiba scrapped an earlier proposal for a three-way split that was unpopular with shareholders, including foreign funds.

Approval for Tuesday’s personnel changes, including the resignation of another board member and nominations of two others, will be sought in a shareholders’ meeting in June, Toshiba said.

Toshiba was one of Japan’s most revered brands but it has been struggling since the Fukushima nuclear disaster in March 2011. A tsunami sent three reactors into meltdowns, spewing radiation over an area that’s still partly a no-go zone. Toshiba is involved in the decommissioning effort, which will take decades.

The company’s reputation was also tarnished by an accounting scandal, which involved books being doctored for years.

But Tsunakawa said he had accomplished his mission of handing over the leadership to the next generation and hoped Toshiba's shareholders, customers and employees would agree with the proposed restructuring plan. He did not say how the company had dealt with dissent.

“I am confident I was able to hand over the leadership toward Toshiba's evolution into the future,” he told reporters in an online news conference.

He defended the decision to appoint Toshiba people, not outsiders, to top positions, stressing that the company needs to change from within. This may be Toshiba's “last chance” to fix its reputation and brand power as a technology company and win back trust, he said.

Founded in 1875, Toshiba was a manufacturing pioneer for everything from electric rice cookers to laptop computers. It also invented flash memory, although that division was sold off as its fortunes tumbled.