The state already has some of the least restrictive gun laws in the nation. 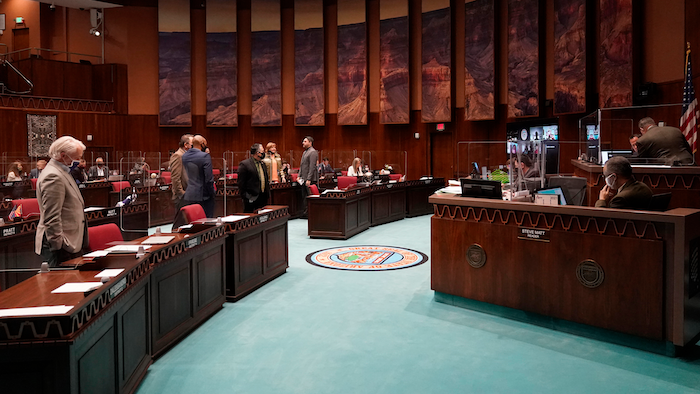 Members of the Arizona House gather at the Capitol in Phoenix, Feb. 18, 2021.
AP Photo/Matt York, File

PHOENIX (AP) — An Arizona bill to prohibit government agencies from contracting with firms that refuse to do business with firearms companies received strong support this week from majority Republicans on a state House committee but generated tough criticism from the banking industry.

The proposal from GOP Rep. Frank Carroll would require companies doing business with the state or local governments to certify they won’t refuse to work with firearms-related companies.

Carroll and other GOP supporters said some banks are refusing to do business with firms involved with the firearms industry. They framed it as an issue of preventing people from exercising their Second Amendment rights.

“Why would you not want to do business with a Second Amendment-related business?” Republican Rep. Quang Nguyen asked a lobbyist for the banking industry during a Wednesday House Judiciary Committee hearing. “I feel that it’s more political.”

But bankers resisted the bill, calling it government overreach for lawmakers to try to force businesses to deal with other companies against their will and said lawmakers are creating a problem with a non-issue in Arizona.

“This seeks to have government interfere with those private businesses and come put their finger on the scale in support of a single industry,” said Jay Kaprosy, a lobbyist for the Arizona Bankers Association. “What this bill is asking you all to do is to pick winners and losers about what businesses in Arizona we’re going to favor and that’s where we have a problem with it.”

Kaprosy said a bank loan officer specializing in farm banking, for example, might reject a loan application for a gun manufacturer because it is outside their firm’s focus and that under Carroll’s proposal that bank could be barred from handling government banking.

The legislation follows the shutdown of social media sites popular with extremists, including Gab and Parler, when their web hosts, banks or payment processors refused to continue doing business.

The Arizona bill stands in contrast to efforts in more liberal states to target gun manufacturers.

New York last year passed a law aiming to make it easier to get around a federal law that gives gunmakers immunity from lawsuits.

California Gov. Gavin Newsom, a Democrat, has proposed another approach targeting firearm companies’ bottom lines, modeled after a Texas anti-abortion law that allows private citizens to bring lawsuits against those who assist with an abortion.

Attorneys general in 13 states and the District of Columbia have also backed a lawsuit brought by the Mexican government against gun manufacturers. Public pension plans in several states have faced pressure to divest stakes in firearms companies.

“This bill is a Second Amendment bill,” Findlay said. “We have members in the state of Arizona as well as all over the country that have been discriminated on access to capital, payment processors.”

Similar legislation has been enacted in Texas, Wyoming and Georgia, he said.

But Kaprosy said the proposal is purely political and threatens the independence of the banking industry.

“It’s a stretch to suggest that this is a Second Amendment issue," Kaprosy said. "This is a political issue in which banks and other businesses are innocent bystanders, frankly, in a war of words and culture that is going on outside the banks.”

The committee voted along party lines, 6-4, with no Democratic support. The bill now heads to the full House after a routine review by another committee.

Two more firearms-related bill that passed the Arizona House on Thursday would loosen gun laws by allowing firearms in libraries and many other public buildings and by permitting loaded weapons to be carried in vehicles on school grounds.

Debates on two other proposals — one allowing guns on university campuses and another to let people between 18 and 20 years of age get provisional concealed weapons permits — were delayed.

Arizona already has some of the least restrictive gun laws in the nation, allowing anyone legally allowed to own a gun to carry a firearm without a permit, making permits for concealed carry exceptionally easy to obtain and allowing private gun sales without background checks.