The latest estimate adds another $5 billion to the long-delayed project. 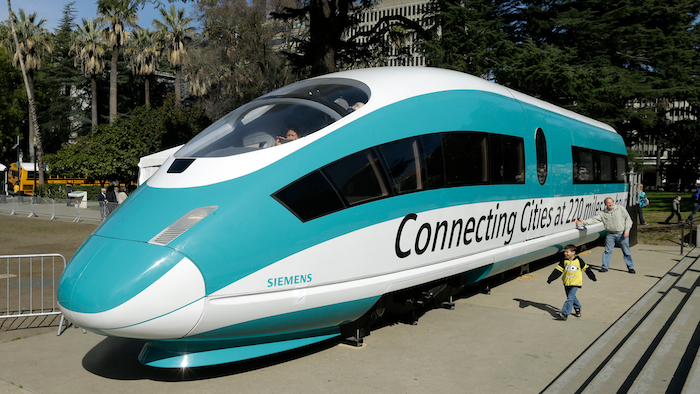 SACRAMENTO, Calif. (AP) — Another $5 billion has been added to the cost of California’s ambitious but long delayed high-speed rail line, according to estimates released Tuesday that show it could take $105 billion to finish the route from San Francisco to Los Angeles.

The figures were included in the California High Speed Rail Authority’s latest biennial business plan. The increases are partly due to commitments aimed at minimizing community disruption, such as distancing the train from the Cesar E. Chavez National Monument in the Central Valley and tunneling tracks near the Burbank airport, project officials said.

The project's price tag has steadily risen since voters first approved nearly $10 billion in bond money for it in 2008, when the total cost was pegged at $40 billion. In the years since, the costs have kept climbing amid struggles to obtain the necessary land and other delays. Today, the rail authority is far short of the money it needs to complete the full project.

The first part of the line will run through the Central Valley; construction is underway on a 119-mile segment where the trains will first be tested before the track is extended to take passengers from Merced to Bakersfield. No track has yet been laid, but the authority has obtained 90% of the land parcels it needs for the first segment and more than half the full 500-mile (804-kilometer) route is now environmentally cleared, according to the business plan.

Chief Executive Officer Brian Kelly said Tuesday the possibility of a fresh infusion of cash from the federal government puts the project on a stronger path. California should be in a good position to compete for as much as $6 billion in grant money under the federal infrastructure bill Congress passed last year, he said.

During the Obama administration, California won roughly $3.5 billion for the project, then former Republican President Donald Trump revoked about $1 billion of that. It's been returned by the Biden administration.

Receiving billions more in federal dollars would allow the project's first operational track to be a double track, not a single one, and help the project move forward on design and other work, Kelly said.

“We just think that this is a great opportunity to really move the project forward," he said.

Republican Assemblyman Jim Patterson of Fresno, a longtime critic of the project whose district it will run through, was unimpressed by the business plan's hopes for receiving more federal money to build a double track.

“Given the embarrassing failures this project has racked up, I’d be surprised if the feds decide to throw more money at it," Patterson said in a statement.

As the project waits for more funding from the Biden administration, the rail authority is also fighting for money from the state. Last year, the Legislature did not agree to Gov. Gavin Newsom's budget request to release $4.2 billion that's left in the voter-approved bond fund for the project. Democratic leaders in the state Assembly have been hesitant to release the money due to skepticism about the project's overall approach and lack of sustained funding.

Newsom, a Democrat, proposed releasing the money again in his January budget proposal as part of a transportation package that also includes billions of dollars for local rail and transportation projects.

“Although the administration was disappointed that the transportation package didn’t get done last year, we continue to move forward and are working to achieve funding in this year’s budget," Newsom spokesman Daniel Lopez said in a statement.

Beyond the bond money and federal dollars, the rail project is funded by revenue from California's cap-and-trade program, which requires polluters to buy permits to emit carbon.