He faced "false and fabricated" charges that he shared information about a "pocket heater" device with counterparts in China. 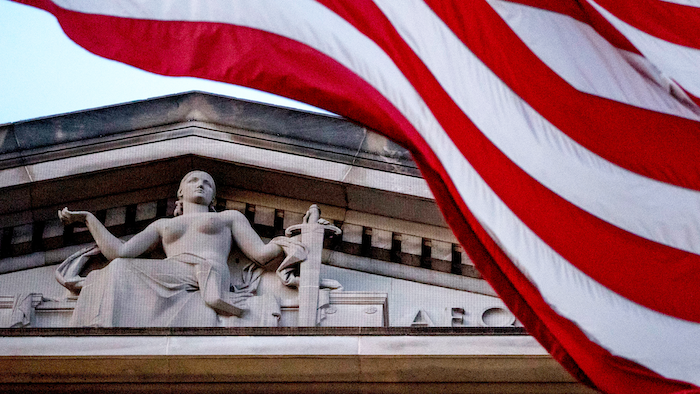 WASHINGTON (AP) — A Temple University physics professor who was charged with sharing scientific technology with China only for the case to collapse before trial and be dismissed by the Justice Department asked a federal appeals court on Monday to reinstate his clams for damages against the U.S. government.

Lawyers for Xiaoxing Xi and his wife say in a brief filed Monday with a Philadelphia-based appeals court that a judge erred last year when he dismissed most of the claims in their federal lawsuit. They assert that the FBI agent who led the investigation “intentionally, knowingly or recklessly” made false statements and misrepresented evidence so that prosecutors could get an indictment.

“When law enforcement agents abuse the legal process by obtaining indictments and search warrants based on misrepresentations or by fabricating evidence, it undermines the legitimacy of the courts,” Xi’s legal team, which includes lawyers from the American Civil Liberties Union, wrote in the brief.

“The judiciary has a stake in ensuring that malicious prosecutions and illegal searches do not go unchecked, and the courts have well-established standards for assessing such claims,” the brief says. “Moreover, the harm to Professor Xi, his family, and society at large, as well as the need to deter further misconduct, strongly weigh in favor of allowing these claims to proceed.”

In a statement provided by the ACLU, Xi said there was “clear evidence that the FBI violated our constitutional rights that day, and years later we are still dealing with the trauma of this ordeal.”

“If we can’t hold the government accountable now, there will be little to stop the government from profiling other Asian American scientists and ruining more innocent people’s lives in the future," he added.

The bungled case against Xi was brought three years before the Justice Department in 2018 launched what's known as the China Initiative, an effort to counter trade secret theft and economic espionage by Beijing.

Many of the cases have targeted professors at U.S. universities suspected of concealing Chinese government ties on applications for federal funding. Despite some convictions, the effort has endured notable setbacks, with prosecutors forced to dismiss several cases over the last year — including one last month, when officials said they couldn't meet their burden of proof against a Massachusetts Institute of Technology professor who'd been charged with fraud.

The China Initiative is now under review, and Patrick Toomey, a senior staff attorney with the ACLU's National Security Project, called Monday for the Biden administration to abandon it.

The legal brief traces the history of the case, recounting how Xi, a naturalized U.S. citizen from China with expertise in thin film superconducting technology, was arrested at his home early one morning in May 2015. His wife and daughters were held at gunpoint in the living room while the professor was taken into custody to be interrogated, fingerprinted and strip-searched.

He was placed on administrative leave, suspended from his job as interim chair of Temple's physics department and was unable to participate in his research.

Xi was indicted on charges that he had shared information about a device called a “pocket heater” with academic counterparts in China. But the criminal charges were “false and fabricated,” Monday's filing states, and the email communications at the center of the indictment were not about a pocket heater but rather about an entirely different device that described a process that Xi and his colleagues had invented.

The Justice Department dismissed the case before trial in 2015. Xi sued in 2017.

In the lawsuit, Xi singled out the FBI agent who investigated him, accusing him of having knowingly made false statements to prosecutors so that they could secure an indictment, of misunderstanding the science at the center of the case and of ignoring information he'd been given prior to the prosecution that established Xi's innocence.

The lawsuit also alleges that Xi was targeted based on his Chinese ethnicity, with lawyers Monday calling the prosecution discriminatory.

In seeking to dismiss the lawsuit, Justice Department lawyers representing the FBI agent, Andrew Haugen, said probable cause had existed to indict Xi even if the case was later dismissed, and that the agent had made “reasonable efforts” to understand the professor's work.

A federal judge in Philadelphia, R. Barclay Surrick, dismissed nine of the couple's 10 claims last year, ruling that they were unable to recover damages from the U.S. government and that judgments and decisions about the investigation and prosecution were matters of discretion. A tenth claim, related to the surveillance of Xi and his family, is still pending.

“What happened to Xi and his family is very unfortunate,” Surrick wrote. “Nevertheless, it is the obligation of this court to simply apply the law as it presently exists to the facts.”

But that ruling was erroneous, according to lawyers for the professor and his wife, who say in the filing that their lawsuit plausibly alleged “the fabrication of evidence to secure an indictment of Professor Xi, the falsification of reports and affidavits to obtain a warrant for the search of the Xi family’s home and belongings, and the discriminatory prosecution of Professor Xi on the basis of his race and ethnicity.”