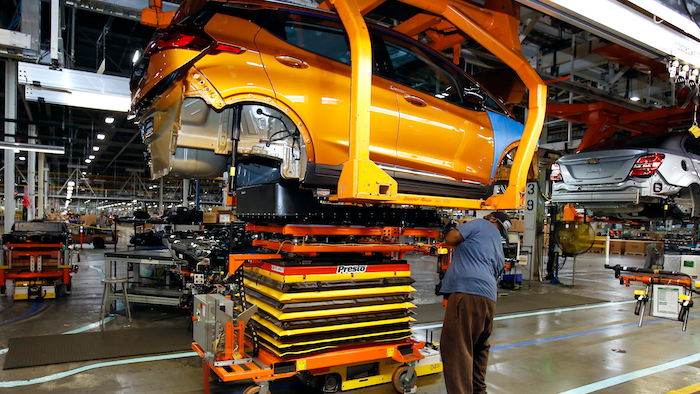 Lawmakers did not say how much money they may put into the accounts to offer manufacturers and other companies and to prepare shovel-ready industrial sites. Some or much of the money likely would come from $5.6 billion in discretionary federal COVID-19 pandemic rescue funding.

While proponents did not specify pending deals for which Michigan is vying, several told the House Government Operations Committee that Michigan must stay competitive in the auto industry.

“These are real opportunities in real time that will be decided over the next 60 to 90 days,” said Quentin Messer Jr., CEO of the Michigan Economic Development Corp. and president and chair of the Michigan Strategic Fund.

The Republican-led House passed the legislation 83-21, with bipartisan support, hours after it was advanced from the panel. The Senate is expected to consider it in the coming days. Negotiations are ongoing.

Backers pointed to Dearborn-based Ford's plans to build three battery factories and an electric assembly plant in Tennessee and Kentucky, a blow to the nation's auto hub. Japanese automaker Toyota this week announced it will construct an electric vehicle battery factory in North Carolina.

“When you look at what happened with Ford, them not even considering Michigan, I think that sent shockwaves through our state. We need to make sure that we have the resources and the tools ready to be competitive across the country,” said House Speaker Jason Wentworth, a Farwell Republican who hopes the package is sent to Democratic Gov. Gretchen Whitmer before the Legislatures adjourns next week.

Wendy Block, vice president of business advocacy and member engagement for the Michigan Chamber of Commerce, said unspecified companies could announce “transformational" and “generational” projects as soon as January. Three big projects are on the table, she said.

“Time is certainly of the essence here,” she said. “We're operating under tight time constraints here if we want to be competitive for some of these next projects.”

The House also approved legislation that would extend, by five years, a 2017 tax incentive program for redevelopment work but leave a $1 billion incentives cap in place.

In 2019, legislators let expire a separate $200 million “good jobs” tax incentive program that had been used to attract large-scale business expansions for about two years.

Before the House votes, several legislators on both sides of the aisle questioned using taxpayer money to create jobs, calling them corporate giveaways that could be better spent on infrastructure upgrades, schools and other government services or to keep taxes low.

“This is one of the most anti-free market things I've ever seen. ... This is big business getting into bed with big government,” said Rep. Steve Johnson, a Wayland Republican.

But Democratic Rep. John Cherry of Flint, noting how the city lost 80,000 auto jobs over decades, said Michigan must adjust to a “revolution” in transportation technology, as a greener economy edges closer into view and away from gasoline-powered cars.

“Other states know that when there's technological change and we have to totally rebuild our manufacturing base to reflect where we're going technologically, they have an opportunity to grab that market. And they are,” he said.