Environmental groups have criticized the government for failing to combat widespread pollution. 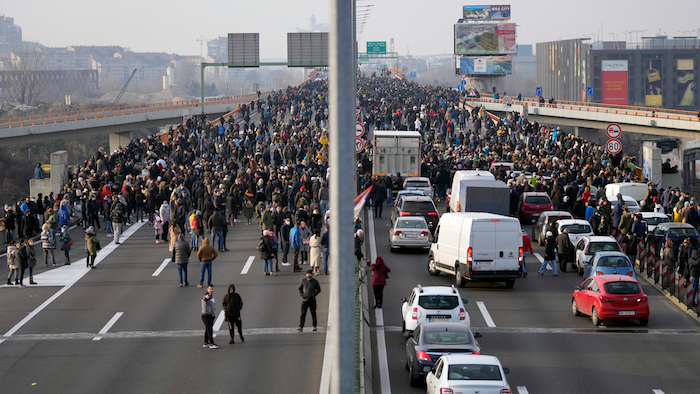 BELGRADE, Serbia (AP) — Thousands of protesters in Belgrade and other Serbian towns blocked main roads and bridges Saturday to decry a planned lithium mine despite police warnings and an intimidation campaign launched by authorities against the demonstrators.

Blowing whistles and chanting “Uprising! Uprising!” protesters stopped traffic on the main highway that goes through the Serbian capital. In the Balkan nation's second-largest city of Nis, the main downtown street was blocked, as was a Danube River bridge in the northern city of Novi Sad.

Uniformed police were not visible during the two-hour protests, which were the most massive demonstrations against the populist government in Serbia in many years.

It was the second such nationwide protest called by environmental groups amid growing public discontent with the autocratic rule of Serbian President Aleksandar Vucic. Last Saturday, the protesters skirmished with police and in one town unidentified masked men attacked them with sticks and hammers.

Environmental groups have criticized Vucic’s populist government for not combating widespread pollution enough in the Balkan nation. They are especially against two laws passed by parliament that they see as laying the groundwork for a lithium mining operation by Rio Tinto in western Serbia.

In a sign of defiance, Vucic on Saturday ignored the protests and traveled to the site where the international mining company plans to start its excavations. His office said he wanted to talk to the locals about the project.

“Our goal is to have a civilized conversation and not under pressure from the streets,” Vucic told the pro-government Pink TV, adding that the police will not intervene Saturday against the protesters.

Vucic and other Serbian officials have denounced the protests and alleged they are financed by the West to destabilize the country and bring the opposition to power.

“The blockade of bridges, highways, roads and the paralysis of life in Belgrade and other cities in Serbia is not a way to express any opinion, but a gross violation of the rights of most citizens,'' said Defense Minister Nebojsa Stefanovic, alleging that opposition parties “want to return to power at any cost."

Many protesters complained that police officers came to their homes and warned them they could face legal consequences and fines if they took part in the environmental rallies. Activist Danijela Vujovic from the southern city of Nis said police came to her home in the morning to warn her that the protests amounted to a “criminal act."

“I don’t see how this is a criminal act,” Vujosevic told N1 regional television. Vujosevic’s daughter could be seen holding a small banner reading “I am public interest!”

The police on Saturday repeated their warning that the protests are illegal and that the organizers will have to bear all eventual consequences. They also issued a special telephone number and an email address for anyone who wanted to report “violence caused by the blockade.”