Multiple nations have warned investors that they "may be involved in a scam." 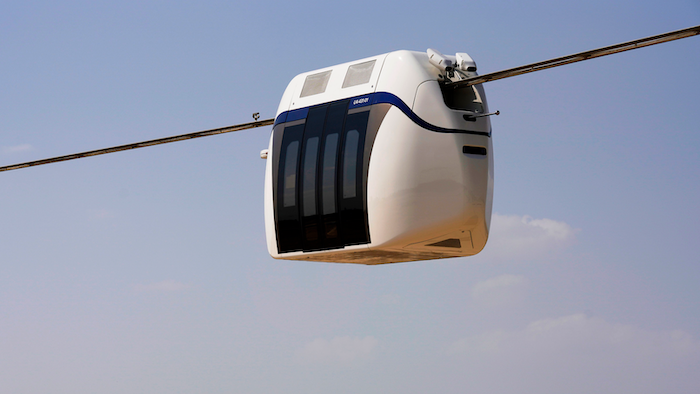 SHARJAH, United Arab Emirates (AP) — The small, four-seat pod glides above the sands of a test track in Sharjah in the United Arab Emirates, a futuristic transit solution promoted by a Belarusian firm that hopes to secure contracts here in the near future.

Inviting journalists to see their test track Thursday, firm uSky showed off what they described as an energy-efficient, smart solution to fly above traffic across the Emirates, a country home to skyscraper-studded Dubai that long has embraced anything futuristic.

However, uSky has ties back to a Belarusian investment firm called SkyWay that has seen multiple nations in Europe and elsewhere issue warnings to investors that they "may be involved in a scam.” Proposals to deploy the technology have been examined and abandoned in several nations as well.

Speaking to The Associated Press, creator Anatoli Unitsky brushed aside questions about the project's financing. He also insisted SkyWay didn't fund the project, calling them instead “my fans” as he wore the investment firm's logo in a pin on his lapel.

Responding later to questions on uSky’s behalf, a Dubai-based public relations firm insisted “no one associated with uSky ... has any legal or financial relations with SkyWay Capital or SkyWay Group.” However, they acknowledged uSky had been known as SkyWay until “inappropriate persons and companies ... misused and compromised the SkyWay brand without our consent.”

The uSky project, whose luxury cabin bears the SkyWay logo inside, carried journalists Thursday across a 400-meter (1,300-foot), straight-line suspended track at the Sharjah Research, Technology and Innovation Park. The pod moved at nearly 50 kph (30 mph), though an engineer insisted a longer track would allow the speed to increase as much as threefold. The line above it remains still as the pod races across it between poles.

Another longer track appeared to be under construction nearby. While the current test facility runs on electricity from the government grid, the company said it would run on electric batteries that would receive energy from renewable sources. It called the line it runs along a string rail.

A brief presentation offered to journalists instead appeared geared toward deep-pocketed investors. It discussed projects ranging from $230 million to $580 million. And that seems to be what uSky is aiming for.

Already, it's offered a tender to neighboring Dubai's Road and Transportation Authority, which wants to transform a city known for its long ribbons of multi-lane highways into a future of driverless vehicles and mass-transit carriers. Yet the flying taxis promised years ago have yet to take off.

Unitsky has yet to successfully land a major project for the string rail pods. In India, a proposed project in a province met criticism and appears to have been abandoned. Another in Indonesia as well faced reported criticism from angry investors.

There also long have been questions regarding SkyWay, which prominently advertises Unitsky and his string-rail technology. In Italy, regulators in 2019 barred SkyWay and a number of subsidiaries from selling shares to the public. New Zealand said SkyWay “could be involved in a scam.” Authorities in Belgium warned investors SkyWay had “the characteristics of a pyramid scheme.” Lithuanian officials flatly told the public: “Be careful or you may lose your money.”

Hussain al-Mahmoudi, the CEO of the Sharjah research park, acknowledged in a brief interview with the AP that he was aware of uSky's connection to SkyWay.

Al-Mahmoudi described uSky as a tenant that paid rent at the park and that had not received any funding from Sharjah, one of the seven sheikhdoms that make up the United Arab Emirates. The uSky facility however prominently displayed a picture of Sharjah ruler Sheikh Sultan bin Muhammad Al Qasimi on a ride in one of the pods.

He added: “Let's not forget this is a startup....When you are in the startup phase, you go through a lot of difficulties."

Al-Mahmoudi made the remarks only moments after telling journalists: “There is no better and real technology and project than the uSky project.”

Speaking to the AP through a translator, Unitsky said there were unnamed “investment funds, not individuals” who funded the project. He also said that he “wasn't engaged in the finances.” Yet the Dubai-based public relations firm later said “the project has been partly backed by Dr. Anatoli Unitsky himself and through private investment funds.”

“SkyWay does not finance us,” Unitsky said. “SkyWay has been a fan of me as an engineer. I have millions of fans all around the globe.”