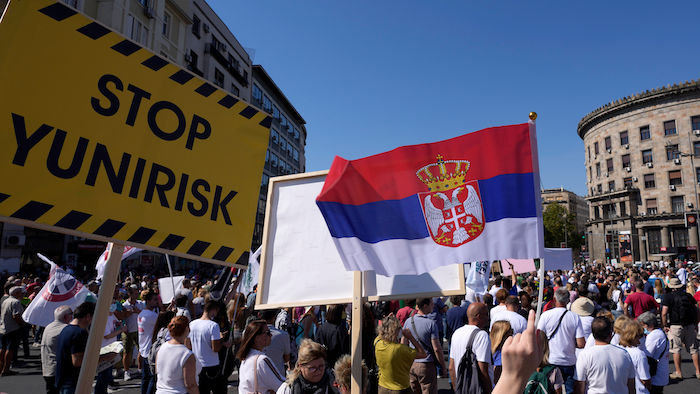 People attend a protest against pollution and the exploitation of a lithium mine, Belgrade, Serbia, Sept. 11, 2021.
AP Photo/Darko Vojinovic

BELGRADE, Serbia (AP) — Several thousand people protested in Serbia on Saturday demanding a ban on planned lithium mining in the Balkan country as well as a resolution to scores of other environmental issues that made the region one of the most polluted in Europe.

The rally in downtown Belgrade was organized by about 30 ecological groups who recently gained popularity in Serbia amid widespread disillusionment with mainstream politicians and amid major pollution problems facing the region.

The protesters held banners demanding protection of Serbia’s rivers, nature and air which they say have been endangered by profit-seeking government policies and decades of neglect.

The protesters later blocked one of the main bridges in the capital for a while as they announced several other blockades in the rest of the country in the coming months.

More than 100,000 people have signed a petition against international Rio Tinto mining company, which has sought to construct a lithium mine in the western parts of the country that is rich in the mineral used in the production of electric car batteries.

“Our demand is that the government of Serbia annul all obligations to Rio Tinto,” said Aleksandar Jovanovic, one of the organizers. “We have gathered to say no to those who offer concentrated sulphuric acid instead of raspberries and honey.”

A number of experts have warned that nature in western Serbia would suffer in the case of exploitation of lithium in the area that is rich in fertile land and agriculture. Serbia has also faced huge pollution problems caused by coal-powered plants run by Chinese companies.

In addition to mining, Serbia has faced mounting problems that include poor garbage management and high air pollution caused by the use of poor-quality coal and other pollutants. Rivers have been polluted by toxic industrial waste and many cities, including Belgrade, lack good sewage and waste water systems.

“We were thirsty this summer, we breathe toxic air and land is being sold out,” organizers of the protest said in a statement. “Forests are being cut and mines are expanding.”

The Balkan nations must substantially improve their environmental protection policies if they want to move forward in their bids to join the 27-nation EU. Impoverished and marred by corruption after years of wars in the 1990s, many Balkan countries have pushed environmental issues to the sidelines.

Rio Tinto has committed $2.4 billion to the project in Serbia which would make it one of the world’s largest producers of lithium amid increasing demand for electric cars.