The company reportedly lost money for the first time in its 27-year history last year. 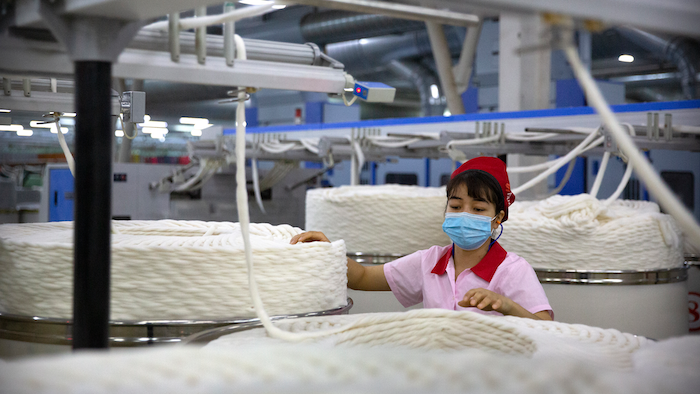 AKSU, China (AP) — A backlash against reports of forced labor and other abuses of the largely Muslim Uyghur ethnic group in Xinjiang is taking a toll on China's cotton industry, but it's unclear if the pressure will compel the government or companies to change their ways.

Li Qiang, general manager of the Huafu Fashion yarn factory in Xinjiang, told reporters that even though the company lost money in 2020 for the first time in its 27-year history, it bounced back by shifting to domestic orders.

“This is now in the past,” Li said. “We’ve turned things around in the first quarter of this year.”

In a crackdown since 2017 after a series of militant attacks, the Chinese government has detained a million or more people in Xinjiang, a major cotton-producing region in China’s northwest that is home to the Uyghurs and other ethnic groups. Critics also accuse it of torture, forced sterilization and cultural and religious suppression.

Apart from cotton, much of the world’s polysilicon for photovoltaic cells comes from Xinjiang. The U.S. is now weighing sanctions over the alleged use of forced labor in the production of solar panels.

Xinjiang officials deny the charges and brush off Western criticism. They recently took about a dozen foreign journalists to the sprawling Huafu complex in Aksu city, where 780,000 spindles churn out 100,000 tons of colored yarn annually for sportswear and other items.

The company said in a preliminary estimate last month that it earned 120 million-150 million yuan (about $20 million) in the first three months of this year, after a 405 million yuan ($63 million) loss in 2020 as sales fell 10 percent.

Evidence of forced labor comes from people who have left China and government documents, but it is difficult to prove definitively at specific factories since human rights experts and others are unable to investigate freely. Diplomats and journalists traveling independently to Xinjiang are followed, and most residents, wary of getting in trouble, are unwilling to talk critically.

“The government doesn’t want information flowing out of the region and they’ve done a good job of making that difficult,” said Scott Nova, the executive director of the Worker Rights Consortium in Washington.

An ethnic Kazakh woman from Xinjiang who fled to Kazakhstan said she was forced to work for a week sewing uniforms in a factory in 2018 after spending almost a year in detention.

Dina Nurdybai ran a clothing business with 30 employees before she was detained. She said the factory work was not voluntary. She was released after authorities realized she was not on a list of long-term detainees.

“If they say they are taking you to a factory, you say ‘yes,’ " she said. ”If you don’t go, they’ll say you have problematic thoughts and persecute you.”

Others also have said they or their relatives were coerced to work in factories.

The government says such testimonies are fabrications. One worker, Paziliya Tursan, said above the hum of spindles at Huafu that reports of forced labor are nonsense. As officials listened in, she said people at the factory stick together like pomegranate seeds, echoing a metaphor used by President Xi Jinping to describe ethnic unity in China.

The U.S. decided last year that the evidence was strong enough to ban imports of clothing, cotton, hair products and computer parts from about a half dozen companies. In January, it expanded the ban to all cotton and tomato products from Xinjiang, which produces processed foods such as tomato paste and about one-fifth of the world's cotton.

U.S. customs denied a request this month from Japanese retailer Uniqlo to release a shipment of men's shirts that had been stopped at a southern California port under the sanctions.

Guixiang, a Communist Party spokesperson in Xinjiang, said companies may lose customers in the short run but eventually become stronger as they and their employees work harder and find new markets. “In some sense, the stress can be transformed into a driving force for the companies,” he said.

China has a huge domestic market and demand is growing in Southeast Asia, the Mideast, Africa and Eastern Europe, said Peng Bo, a senior vice president at Founder CIFCO Futures, a financial derivatives firm in Beijing. Chinese manufacturers also have gained market share as the pandemic hobbled competitors in other countries.

“Though the international market is important to domestic brands, it is not irreplaceable, particularly the European and American markets,” he said.

On top of import bans, the U.S. Commerce Department has blocked the sale of U.S. technology and parts to more than two dozen companies linked to human rights abuses in Xinjiang, including Huafu. That adds to pressure to stop dealing with the company.

Technology companies have also been targeted. Commerce added Nanchang O-Film Tech, whose customers have included Apple and Lenovo, to the blacklist last July. The company has employed Uyghur workers brought to Nanchang from Xinjiang, some 3,000 kilometers (1,900 miles) away, under restrictive conditions.

Its parent OFILM Group said it lost 1.9 billion yuan ($300 million) last year because overseas customers dropped contracts. It did not say which customers.

The forced labor allegations extended to cotton picking late last year with a BBC story and a report by U.S.-based researcher Adrian Zenz. His study, based largely on publicly-available Chinese government documents, found “strong indications” of coercion and concluded that “it must be assumed that any cotton from Xinjiang may involve coercive labor, with the likelihood of coercion being very high.”

China accused Zenz and the British public broadcaster of anti-China bias. Foreign journalists were taken to a 40-hectare (100-acre) cotton field that was being planted by machine, and officials said mechanization has eliminated the need for most workers.

Picking cotton is more difficult than planting it, though, and where it is mechanized in Xinjiang, it often depends on American technology in the form of John Deere machines. Deere said in a statement that U.S. sanctions have affected its business but declined to provide specifics.

The government says 70% of harvesting is mechanized, but that varies from place to place. Use of machine picking is more common in the north. In southern Xinjiang plots tend to be smaller and more scattered, with 53% of total acreage harvested by machine in 2020, up from 35% in 2019, according to the government. It acknowledged that farmers still plant and harvest by hand in many places.

Nova of the Workers Rights Consortium said companies should not buy from Xinjiang because of the “substantial risk” of forced labor at any factory and the inability to conduct a proper inspection.

“A Uyghur worker cannot speak freely and candidly about forced labor, particularly if they are a victim of forced labor,” he said. “And so when you’ve got a combination of risk and the inability to manage that risk via labor rights due diligence, the only responsible approach . . . is not to source from that particular place.”