This year's America’s Cup is pushing the boundaries of sailing technology at close to freeway speeds. 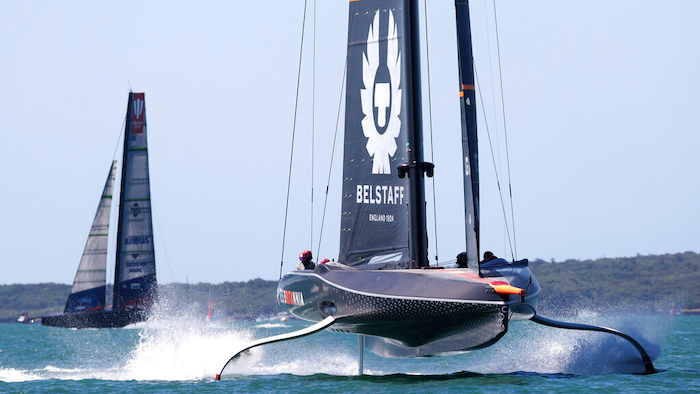 There’s going to be a showdown between Pirelli and Penske on New Zealand’s Hauraki Gulf, with the winner taking on Mercedes GP.

Instead of fast cars, these races will be between remarkably fast sailboats powered in part by brainpower and financial backing from some of motorsports’ biggest names, in an America’s Cup that is pushing the boundaries of technology at close to freeway speeds.

Roger Penske, the American auto racing titan who bought the Indianapolis Motor Speedway last year, is one of three principals backing American Magic, reportedly with significant sums of their own money. American Magic’s yacht Patriot will race for the first time since sustaining serious damage in a dramatic capsize on Jan. 17 while leading Luna Rossa during a round-robin race.

The winner of the best-of-7 semis advances to face undefeated INEOS Team UK, whose principal and skipper, Sir Ben Ainslie, has credited Formula One powerhouse Mercedes with helping his yacht Britannia turn a 180 after looking dead in the water during a warmup regatta in December.

The stars of this regatta are the fantastical-looking AC75 yachts, which rise up on hydrofoils and speed across the tops of the waves, their hulls lifted out of the water to reduce drag. INEOS Team UK hit 50.29 knots — 57.9 mph — in a thrilling win against Luna Rossa that vaulted the British directly into the Prada Cup final.

“Whenever there is competition at the highest level, there is Pirelli,” CEO Marco Tronchetti Provera said from Milan. “These are amazing boats with a level of technology we have never seen. That was attractive and I think it fits perfectly with the Pirelli brand.”

This is the second America’s Cup for Pirelli, whose technical contributions have been rewarded by having its yellow logo splashed across the mainsail of the Italian yacht.

Pirelli has been the sole tire supplier for F1 since 2011 and supplies half of the so-called prestige segment of luxury and sports cars. Luna Rossa asked Pirelli to develop an elastomer — a polymer that behaves like elastic rubber — to coat the surfaces of the foils and rudder that are in the water.

“It’s like what happens in Formula One when the rubber transmits the force of the engine to the asphalt. The goal of our collaboration with Luna Rossa was to do the same, transmit the force coming from sail to the ocean,” Tronchetti Provera said.

Pirelli has also contributed to the yacht’s aerodynamics above the waterline.

“The beauty of Pirelli is we’re not just dealing with one team, we’re dealing with a company that deals with all of the teams in motorsport out there, and a lot of different development and performance programs,” said Luna Rossa co-helmsman Jimmy Spithill, an Australian who twice won the America’s Cup with Oracle Team USA. “It’s a huge upside. They have played an important role, whether it be analyzing or providing actual components."

Penske has brought management expertise to American Magic, as well as financial backing.

“He’s very active,” skipper and executive director Terry Hutchinson said. “He brings a different type of discipline to our team. He asks a lot of questions and he’s not a sailor so his questions come with credibility because he’s Roger Penske.”

With help from Mercedes, INEOS Team UK made extensive changes to Britannia after its embarrassing December performance and raced through the round robins with a 6-0 record.

Ainslie, who helped Oracle Team USA win the America’s Cup in 2013, said Mercedes has been “a massive help through the campaign,” right up to Toto Wolff, a former driver who is team principal and CEO.

Up to 30 engineers from Mercedes F1 Applied Science division have worked with INEOS Team UK since August 2019. Two members of the Mercedes F1 staff are with the team in Auckland.

“They’ve been helping us to analyze some of the issues we’ve had over the last couple of months,” said Ainslie, who represents England’s best chance yet to win back the silver trophy it lost to the schooner America 170 years ago. “They’ve had a really big impact on our team.”

The shortage is undeniable and unpredictable, but your response to it can make the difference between your business surviving or thriving.
Jun 11th, 2021
Follow Us
Most Recent