The overhaul of the old Athens airport site could be the largest project in the Mediterranean. 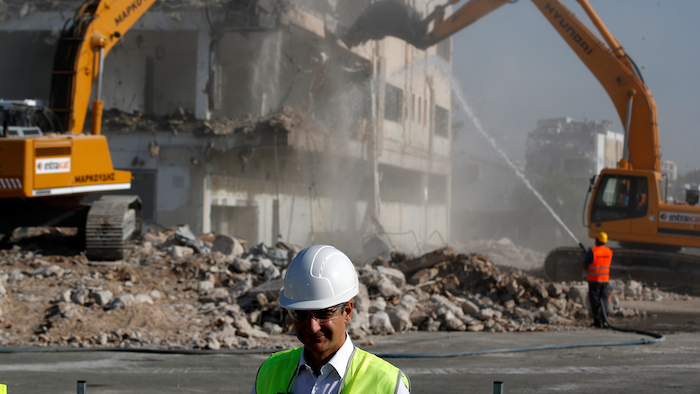 ATHENS, Greece (AP) — Greece’s prime minister on Friday inaugurated the start of construction work on a long-delayed major development project at the prime seaside site of the old Athens airport.

Kyriakos Mitsotakis hailed the start of work as a major step in the implementation of what he described as “possibly the largest project in the Mediterranean.” After his brief speech on site, bulldozers began pulling down one of the more than 200 abandoned buildings.

The development of the 620-hectare (1,500-acre) Hellenikon site was a key element of the privatization drive that was part of Greece’s international bailouts. The country received billions in emergency loans to tackle a catastrophic financial crisis, but had to pass sweeping structural reforms and privatizations in return.

The revamping of the airport has been tied up in court cases for nearly two decades, with critics of the project citing environmental and heritage concerns. Ancient cemeteries and a prehistoric settlement have been found in the area. In 2018, the Supreme Court approved the project.

The old airport site was sold to a consortium led by Greek Lamda Development, which has planned an 8 billion-euro investment, including a park, housing, shopping areas, a marina, hotels and a beach that will be freely accessible.

Mitsotakis said the development would lead to the creation of 80,000 jobs and the project would be environmentally friendly and guarantee access for all residents of the wider Athens region.

“Today we make a start, but there is a long road ahead of us,” Mitsotakis said, noting that it could take 10 years for the development to be completed.

Of the new jobs to be created by the project, around 10,000 are expected to be generated during the construction phase, Mitsotakis said.

“It will be a modern, ecological project that is friendly towards the environment,” Mitsotakis said. “A project that will symbolize the new Greece, as I believe we all envisage it.”