The head of the National Association of Manufacturers said the country “can’t go through this again.” 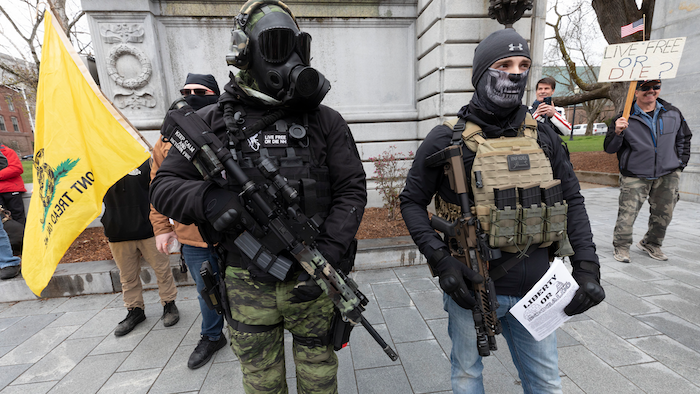 The president and CEO of the National Association of Manufacturers this week warned that protests against states’ orders to stay home risked further damage to the economy and the lives of workers in vital manufacturing operations.

Jay Timmons, in an interview with the New York Times, characterized the small groups of protesters in a handful of states as selfish and “irresponsible.” He was reportedly more blunt in a Facebook post, which began simply, “IDIOTS.”

“We don’t want to risk having to shut our economy down again. We can’t go through this again,” Timmons told the paper. “And it’s unfortunately likely that that will happen if you have people who are irresponsible beating their chests at a demonstration on the steps of the state capitols surrounded by dozens if not hundreds of other irresponsible people.”

Relatively small protests against stay-at-home orders were held in several states in recent days — some with the backing of President Trump — as health authorities warned that the county still wasn’t prepared to properly test and track the coronavirus. Timmons encouraged people to protest within social distancing guidelines or voice their displeasure to media or lawmakers via phone or the internet.

Timmons, who was appointed to a White House panel on recovering from the pandemic last week, added that he believes the economy could open “in a common-sense way.” The NAM this week published a series of recommendations to help manufacturers meet the crisis — including health guidelines, legal reforms and an emphasis on producing protective equipment.

Although he said he understood protesters’ concerns, Timmons warned that a return to normal wouldn’t be possible unless manufacturing workers can safely do their jobs.