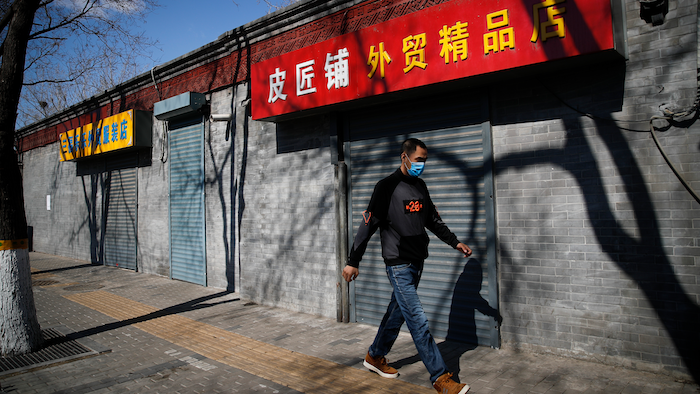 The data add to growing signs of the disease’s cost. Global stock markets have tumbled more than 10% since mid-February as outbreaks in Iran, Italy and South Korea fueled fears the virus will spread.

Chinese factory activity fell at its fastest rate and to its lowest level on record as anti-disease efforts closed factories and disrupted supplies, according to surveys by a business magazine, China’s statistics agency and an industry group.

A monthly purchasing managers’ index released Monday by Caixin magazine fell to 40.3 from January’s 51.1 on a 100-point scale on which numbers below 50 show activity contracting.

Despite that, business confidence rose to a five-year high after the ruling Communist Party launched efforts to revive industry with tax cuts and other aid, Caixin said.

“Manufacturers were confident that output would rise over the next year,” the magazine said in a statement.

A separate PMI released Saturday by the National Bureau of Statistics and the China Federation of Logistics & Purchasing fell to 35.7 from January’s 50.

The data suggest “the worst is now likely behind us” in China, said Citigroup economists in a report.

“The poor data may accelerate policy interventions to repair the economy," they wrote.

However, the impact of job losses "will take longer to reverse,” said Julian Evans-Pritchard of Capital Economics in a report.

“With the jump in virus cases overseas, there is a growing risk of a protracted downturn in foreign demand," wrote Evans-Pritchard. “The likelihood of a quick V-shaped recovery in the coming months is falling fast.”

The group of companies covered by the Caixin survey, begun in 2004, has more private enterprises and exporters. The survey by the NBS and the logistics federation, carried out since 2002, has more state-owned companies that serve China’s domestic market.

Both surveys came in well below previous lows following the 2008 global crisis.

Shock waves spread through Asia and other suppliers of components and raw materials as demand from Chinese factories that assemble most of the world's smartphones, toys, home appliances and other consumer goods plummeted.

The Communist Party is trying to revive business activity in some parts of China while ordering areas deemed at high disease risk to stay focused on fighting the virus. Beijing has cut a key interest rate and promised tax breaks, low-cost loans and other aid. Local officials have orders to help millions of employees get back to work while preventing a rebound in infections.

Chinese officials have expressed confidence the ruling party's annual economic growth targets can be met despite the disruption.

Economic growth fell to a multi-decade low of 6.1% last year. Forecasters already expected this year's growth to decline below 6%. They say the longer it takes to control the virus, the bigger the stimulus will have to be to hit official growth targets. That might push up already high debt levels.

Most access to Wuhan, a manufacturing hub with 11 million people where the disease first emerged, was suspended Jan. 23. Controls on travel spread to cities with a total population of 60 million and restaurants, shops, cinemas and other businesses nationwide were ordered to close. Sales of autos and real estate fell close to zero.

Some industries, including state-owned steel and copper mills, operated at normal levels throughout the shutdown, helping to buoy the official activity reading.

Manufacturing activity normally would rebound in February as factories reopen and replenish raw materials following the Lunar New Year, when many shut down for two weeks or more.