A federal appeals court panel said the agency must still consider dangers posed by asbestos, lead and other toxins. 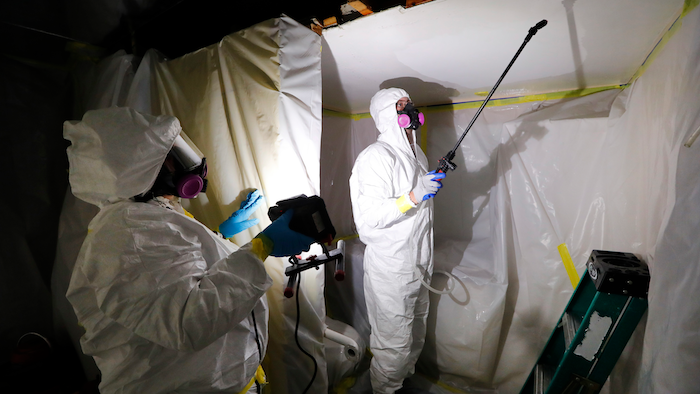 BILLINGS, Mont. (AP) — The Trump administration unlawfully excluded millions of tons of some of the most dangerous materials in public use from a safety review, a federal appeals court ruled Thursday.

A three-judge panel of the 9th U.S. Circuit Court of Appeals said the U.S. Environmental Protection Agency must consider dangers posed by asbestos, lead and other toxins regardless of whether they’re still being manufactured.

Millions of tons of those chemicals are in the marketplace, in products ranging from home insulation and fire retardant to house paint and plumbing pipes.

The safety review was mandated by Congress and is the first step toward enacting potential new regulations to protect the public.

Under President Barack Obama, the EPA said it would consider the risks of those older products since they result in some of the most common chemical exposures by people.

But spurred by the chemical industry, the EPA under President Donald Trump sought to limit the review to products still being manufactured.

Firefighters and construction workers complained that ignoring products already in use would jeopardize their health A coalition of unions, safety advocates and scientific groups had sued to block the EPA proposal released in 2017.

“The big issue in the case was what exposures does the EPA have to look at it when it assesses the use of a chemical,” said Eve Gartner, an Earthjustice attorney who represented the Union of Concerned Scientists, the Sierra Club and other plaintiffs in the case.

“If EPA doesn’t consider lead pipe or lead paint,” she added, “then it might end up saying lead is safe because you’re not going to look at how people are exposed to lead.”

For asbestos, the EPA proposal would have meant gauging the risks from just a few hundred tons of the material that are imported annually — while excluding almost all of the estimated 8.9 million tons (8.1 million metric tons) of asbestos-containing products that entered the marketplace between 1970 and 2016.

The chemical industry’s lobbying arm, the American Chemistry Council, had pushed back against the Obama administration’s interpretation of the law in question, known as the Toxic Substances Control Act.

Representatives of the group said the EPA’s original plan was chasing “illusory risks,” and that it should concentrate on products now entering the marketplace.

Democrats and public health advocates have criticized the agency’s leadership for appointing people with longstanding ties to the chemical industry into senior positions.

Chemistry council spokesman Scott Openshaw did not directly respond to the judges’ ruling on so-called “legacy” uses of chemicals no longer in manufacture.

Openshaw said the group was pleased with a portion of the ruling in which judges agreed with industry: The court said the EPA was justified in not considering the risks from chemicals that have already been disposed of, such as in landfills.

However, the court said if those landfills leak or if chemicals are spilled, those should still be considered as part the safety review.

The EPA has until next summer to finalize risk evaluations for the first 10 chemicals under review, then decide if new regulations are needed.