US Watchdog Warns of 'Improper Influence' in Tariff Process 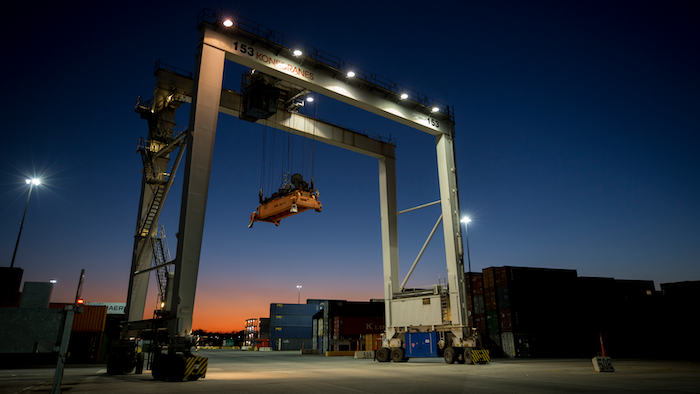 In this Jan. 30, 2018, file photo a rubber tire gantry moves into position to transfer shipping containers at the Georgia Ports Authority's Port of Savannah in Savannah, Ga. A federal watchdog is criticizing the way the Trump administration handles taxes on imported steel and aluminum, saying a lack of transparency creates the appearance of "improper influence." The Commerce Department's inspector general is raising questions about a process that lets steel and aluminum importers request relief from tariffs imposed in March 2018.
AP Photo/Stephen B. Morton, File

WASHINGTON (AP) — A federal watchdog is criticizing the way the Trump administration handles taxes on imported steel and aluminum, saying a lack of transparency creates the appearance of "improper influence."

The Commerce Department's inspector general raised questions about a process that lets steel and aluminum importers request relief from tariffs imposed in March 2018.

Other companies — mostly U.S. steel and aluminum producers that benefit from the tariffs — can object to the exemption requests.

In an Oct. 28 report, the IG said Commerce officials had discussed the requests with "interested parties" and took action based on those conversations. But it said the exchanges were not mentioned in official records, suggesting that the "review process is not transparent and that decisions are not rendered based on evidence contained in the record."

"When those conversations are not on the record, it invites a temptation by external parties to pick up the phone and see if you can get what you want," said Christine McDaniel, senior research fellow at George Mason University's Mercatus Center, who has studied the steel and aluminum tariffs. "It's in the interest of the public and the responsibility of Commerce to set clear guidelines on the process and be as transparent as possible."

The IG also said that Commerce tightened the criteria for considering exemption requests, making it harder to get them approved, after hearing from a tariff supporter. Commerce made the decision without seeking other opinions, creating "the perception of undue influence," the IG said.

Rulings on exemption requests by Commerce's Bureau of Industry and Security are supposed to be final. But the IG found evidence of "an unofficial appeals process" in which officials at the bureau reconsidered their decisions when other companies objected. Still, the IG found no evidence that any decisions had been changed.

In a statement, Commerce said it "has taken numerous steps to safeguard" the process. But it said it takes the IG's critique seriously and "plans to further improve transparency."

President Donald Trump campaigned on a promise to protect traditional American industries like steel and aluminum from foreign competition he sees as unfair. Last year, he used a little-used weapon in trade policy that lets him declare specific imports a threat to national security to slap tariffs on foreign steel and aluminum.

The administration agreed to hear appeals from companies that rely on imported metals. It expected to get 4,500 requests for relief. But through mid-June, according to research by McDaniels and Danielle Parks at Mercatus, it had been deluged with 72,771. Commerce has approved nearly 72% of the requests it's ruled on.