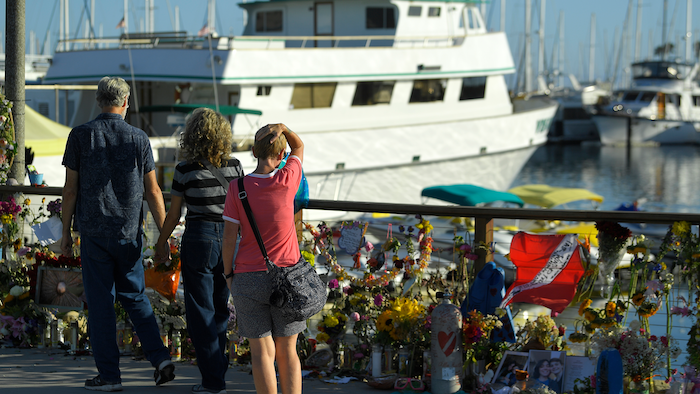 In this Sept. 6, 2019, file photo, people visit a growing memorial to the victims who died aboard the dive boat Conception as its sister boat Vision sits in the background, in Santa Barbara, Calif.
AP Photo/Mark J. Terrill, File

LOS ANGELES (AP) — The owner of a scuba diving boat company announced Tuesday a voluntary indefinite suspension of its fleet in the wake of a boat fire off the Southern California coast that killed 34 people.

Truth Aquatics Inc. posted on its Facebook page that the company will "dedicate our entire efforts to make our boats models of new regulations" in collaboration with the Coast Guard and the National Transportation Safety Board.

Federal authorities are investigating the Sept. 2 fire aboard the Conception in ongoing criminal and safety inquiries. Investigators concluded their examination of the vessel Friday in Port Hueneme, a naval base northwest of Los Angeles, without determining the blaze's cause . However, pieces of the boat have been sent to labs for additional testing as officials pore through hundreds of documents seized from Truth Aquatics' office in Santa Barbara.

While NTSB member Jennifer Homendy has expressed concern about the Conception's escape hatch, Coast Guard records show the boat passed its two most recent inspections with no safety violations. Authorities have said, however, all six crew members were asleep when the pre-dawn fire started — even though Coast Guard regulations require a "roving" night watch.

Thirty-three passengers and one crew member were trapped below deck and died during the three-day scuba diving excursion of the Channel Islands.

The company's Facebook post states customers have been requesting tours since the fire and the owners appreciate the support. The company's two other boats have not returned to sea since the disaster last month.

Meanwhile, the owners, the Fritzler family, preemptively filed a federal lawsuit under a pre-Civil War maritime law that shields boat owners from monetary damages in a disaster at sea. Separately, Ryan Sims, a cook on the vessel who broke his leg trying to escape the flames, claimed in his own lawsuit that the boat was unseaworthy and operated in an unsafe manner.

Members of the diving community have rallied around Truth Aquatics and the Fritzlers. Some have created a private Facebook group called "We Support Truth Aquatics," which has nearly 200 members, and a GoFundMe fundraiser has accumulated more than $18,000 to aid the company's crew members who are now out of work due to the suspension of the fleet.

The Divers Alert Network has separately raised more than $197,000 for the families of the victims.