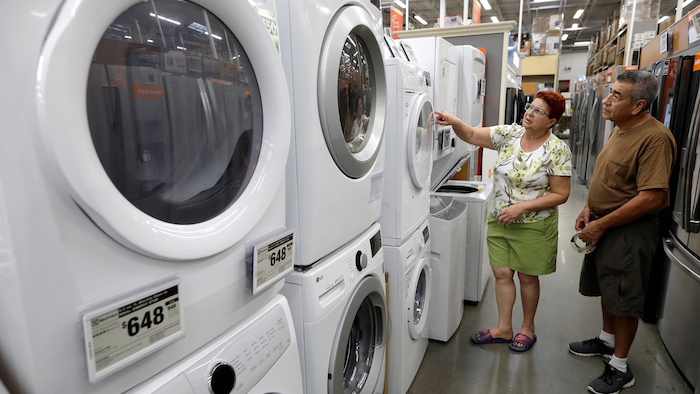 In this Sept. 23, 2019, photo, Maria Alvarez and her husband Guillermo Alvarez examine washers and dryers at a Home Depot location in Boston.
AP Photo/Steven Senne

Orders for durable goods edged up 0.2% in August after a much bigger 2% gain in July, the Commerce Department reported Friday. The volatile commercial aircraft sector dropped sharply.

Orders in a key category used as a proxy for business investment edged down 0.2 percent, the weakest showing since a 1.1% drop in April. This category has lagged for most of the year.

Analysts say businesses have pulled back on their investment plans because of concerns about what Trump's trade war with China will do to the economy and demand in their own businesses.

While financial markets have been roiled this year over news that the trade fight was intensifying, those concerns have eased a bit of late as negotiators from, both countries have resumed meeting with high-level talks scheduled for next month.

Still, economists warn that if Trump goes ahead with a significantly expanded list of Chinese goods subject to tariffs, it could be enough to push the country into a recession next year.

The hope is that if both countries cannot reach a deal over U.S. demands for better protections for U.S. technology, the two nations will at least declare a ceasefire and stop tit-for-tat tariff escalations.

The Federal Reserve in July cut its benchmark interest rate for the first time in a decade and then followed up with another quarter-point reduction last week. Those moves were seen as providing protection for the U.S. economy from the fallout from the trade battle.

Demand for machinery edged up 0.6 percent while orders for computers and related products rose a slight 0.1%.