The Coast Guard agreed it was safe for vessels to slowly sail one by one past the overturned freighter. 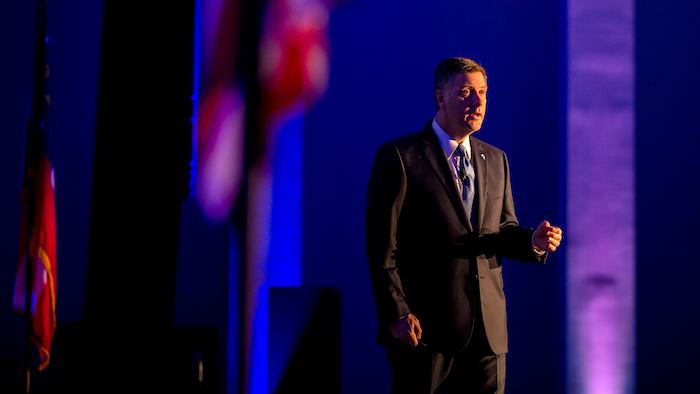 SAVANNAH, Ga. (AP) — A Georgia seaport that shut down when a cargo ship overturned while returning to sea was allowed to reopen Thursday after the Coast Guard agreed it was safe for vessels to slowly sail one by one past the capsized freighter.

The decision to open the shipping channel to the Port of Brunswick came four days after the South Korean ship Golden Ray toppled over soon after departing the port with a cargo of 4,200 vehicles. The ship's pilot and all 23 crew members were rescued, including four men who endured 36 hours trapped below its decks.

At the Georgia Ports Authority's annual "State of the Ports" event Thursday in Savannah, officials including Gov. Brian Kemp praised the Coast Guard for the successful rescues and the swift reopening of the Brunswick port.

"We are back open for business in Brunswick, another remarkable achievement," Kemp told about 1,400 business leaders, elected officials and others attending the event in Savannah, about 70 miles (110 kilometers) north of the port.

Coast Guard Capt. John Reed told The Associated Press the port was allowed to resume operations once crews determined ships could safely pass the Golden Ray, which measures more than 650 feet (nearly 200 meters) long. Two vessels stuck at the port since Sunday had been allowed to depart Wednesday as a test to make sure their passing didn't jostle the overturned ship.

Authorities expect the Golden Ray could remain in the St. Simons Sound for months.

"They'll set up a schedule so that they're able to safely move by the Golden Ray and not interfere with ongoing salvage operations or oil pollution work," Reed said.

One ship arrived at the docks in Brunswick by late Thursday afternoon, and three others were expected later in the day, Coast Guard Cmdr. Norm Witt told a news conference in Brunswick. Three additional vessels still waiting at sea will likely be allowed in Friday, though Witt noted the Coast Guard was approving trips to and from the port "on a case-by-case basis."

Griff Lynch, executive director of the Georgia Ports Authority, told reporters after his Savannah speech that port officials are working closely with the Coast Guard. He said initial traffic would likely be limited to daylight hours.

"We want to make sure we go at slow speeds, that there's no wake from the vessel that would shift the capsized vessel in any way," Lynch said.

As the Coast Guard works with salvage experts on a plan for removing the Golden Ray, a multi-agency response team is also cleaning up any oil leaks around the site. Officials have said only a light sheen has been discovered so far, and that's being mopped up using absorbent boom that acts like a string of large cotton balls.

Witt said Thursday salvage crews have successfully sealed off fuel vents on the ship. Next they want to determine how much of the estimated 300,000 gallons (1.1 million liters) of fuel in the Golden Ray's tanks can be safely siphoned from the ship.

Brunswick is one of the busiest U.S. ports for shipping automobiles. More than 613,000 vehicles and heavy machinery units moved across its docks in the 2019 fiscal year that ended June 30.