What Caused Ship to Tip?

Experts say source of imbalance is key to why ship overturned. 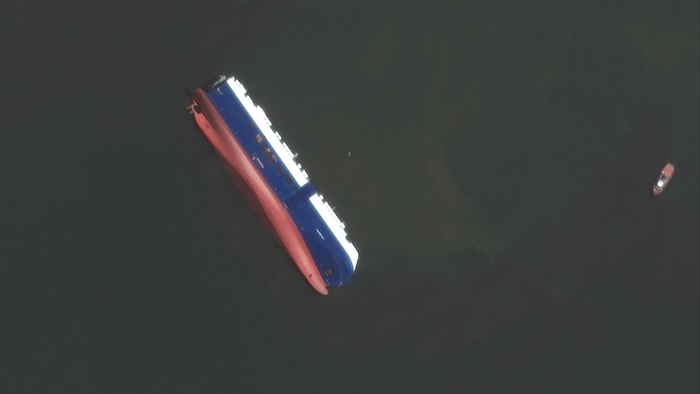 This Sept. 10, 2019 satellite photo provided by Maxar Technologies, shows the capsized cargo shop Golden Ray in Jekyll Island, Ga. A fire broke out aboard the ship early Sunday, listing it to the side and blocking the shipping channel. The Coast Guard and a salvage crew freed the four remaining Golden Ray crew members.
Satellite image ©2019 Maxar Technologies via AP

SAVANNAH, Ga. (AP) — As authorities try to answer why a cargo ship carrying 4,200 vehicles overturned on the Georgia coast, maritime experts say investigators will be looking for shifting cargo or other problems that upset the giant vessel's balance enough to make it fall onto its side.

The U.S. Coast Guard is leading the investigation into what caused the South Korean ship Golden Ray to capsize early Sunday soon after it departed the Port of Brunswick, about 70 miles (112 kilometers) south of Savannah. The ship's pilot and 23 crew members were all safely rescued, including four men trapped for 36 hours before they could be extracted through a hole drilled into the hull.

Measuring 656 feet (199 meters) long and 83 feet (25 meters) wide, the Golden Ray is roughly the size of a 70-story office building. Such vehicle carries tend to be ungainly and bulky, making them "like a floating shoebox," said Joseph Murphy, a retired ship captain and professor of marine transportation at Massachusetts Maritime Institute.

Keeping those ships upright requires a balancing act that involves distributing the weight of its cargo and fuel as well as water in the ship's ballast tanks, which fill to add weight and help lower a vessel's center of gravity.

"There's a lot of different things that could have happened here," said Jim Staples, who worked 17 years as a captain aboard vehicle carriers similar to the Golden Ray and is now a maritime consultant. "We definitely know there's a stability problem with the ship somewhere."

Staples said investigators will be asking whether vehicles in the cargo decks may have shifted and upset the ship's balance, and whether they were lashed down properly. Were the ballast tanks holding enough weight to keep the vessel steady? Staples said crews sometimes wait to fill ballast tanks until they reach open seas to keep muddy water and marine animals from getting sucked into the tanks.

Coast Guard officials have declined to say what might have caused the Golden Ray to list and flip onto its side. The National Transportation Safety board has assigned investigators to assist them.

The weather doesn't appear to be a factor. Hurricane Dorian brushed the Georgia coast with tropical-storm force winds as it passed offshore last week, but that was four days before the Golden Ray overturned.

After the storm passed, the Army Corps of Engineers inspected the shipping channel between the Brunswick port and the Atlantic Ocean to look for any obstructions in the storm's wake that might impede ship traffic. The agency found none, said Billy Birdwell, an Army Corps spokesman in Savannah.

Coast Guard Capt. John Reed has said the Golden Ray was making a turn before it capsized. Satellite data recorded by the ship-tracking website Marine Traffic shows an inbound ship passing the Golden Ray around the same time it overturned in St. Simons Sound.

If the ship was turning at a high enough speed, the Golden Ray may have listed just enough to set off a chain reaction of events that ultimately pulled the ship down, said Brandon Taravella, a professor of at the University of New Orleans' school for naval architecture and marine engineering.

"These car carriers are kind of notorious for cargo shifting inside," Taravella said. "If you take a hard turn and then list at 10 degrees, then the cars can shift and you're listing at 20 degrees. If you've got openings in the deck and lean enough to take on water, it's going to be impossible to get it back upright."

The Coast Guard is also working with salvage experts to decide how to remove the Golden Ray from the shipping channel.

"This is a complex salvage case," Cmdr. Norm Witt told reporters Tuesday. "It is not going to be quick. I would say we're going to measure this in weeks, if not months."

Some capsized ships have been salvaged by placing external ballast tanks beneath the side in the water, then filling them with air to push the ship upright and keep it buoyant, said Timothy McCoy, a professor at the University of Michigan's naval architecture and marine engineering program. That might be tough to do with the Golden Ray, McCoy said, considering the added weight of more than 4,000 vehicles inside.

"They may have to cut it up in place. That's the worst case scenario," McCoy said. "It's going to be a real challenge getting that one out of there."