Not everyone thinks it was a good idea. 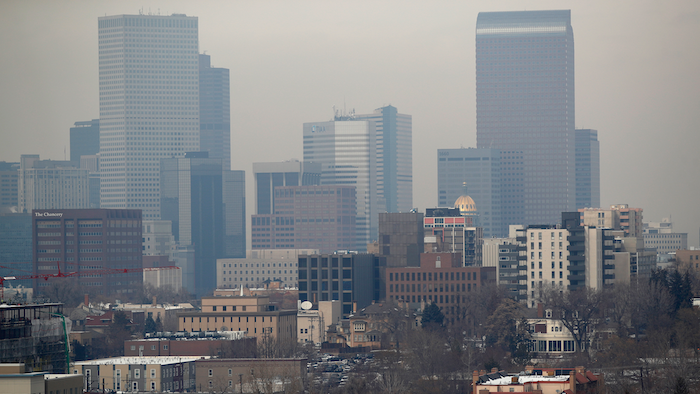 In this Jan. 21, 2003, file photograph, vehicles head inbound on South Broadway as polluted air obscures the view of the skyline of Denver from the south suburb of Englewood, Colo. The U.S. Environmental Protection Agency held a hearing Friday, Sept. 6, 2019, to discuss a plan to lower the ozone status of Denver and eight other northern Colorado counties from "moderate" to 'serious," a move that would force the state to clean the air but which businesses object to becuse of potential additional regulations.
AP Photo/David Zalubowski, File

DENVER (AP) — Colorado took the unusual step of inviting the U.S. Environmental Protection Agency to downgrade the air quality rating of the state's biggest population center, and not everyone thinks that was a good idea.

The EPA held a hearing Friday on whether to lower the ozone status of Denver and eight other northern Colorado counties from "moderate" to "serious." That would force the state to work harder to reduce harmful pollution but also bring tougher and costly regulations for businesses.

The agency expects to decide by the end of the year.

The EPA acted after Democratic Gov. Jared Polis said in March that Colorado would no longer ask for an exemption from EPA standards by claiming some of the pollution was drifting into the state from elsewhere.

It's time to stop "sugar-coating" Colorado's air problems, he said last month. "Moving to 'serious' status finally helps us stop sweeping our air quality crisis under the rug and gives us additional tools to move urgently to make our air cleaner," he said.

But business groups say the state's own data shows Colorado would meet EPA standards if not for pollution from other states and even other continents. Lowering the air rating would hurt the economy by increasing the cost of doing business, they say.

"We're talking about tens of millions of dollars in direct and indirect costs," Paul Seby, an attorney representing Defend Colorado, said in an interview before the hearing. Defend Colorado advocates for business and industry on state and federal regulation.

Denver and the northern Colorado urban corridor have struggled to meet EPA ozone standards for 15 years. Ground-level ozone can aggravate asthma and contribute to early deaths from respiratory disease. It's the main component of smog, and it's created from pollution emitted by vehicles, industries, solvents and other sources.

Clean-air advocates welcomed Polis' decision to pull the state's request for an exemption.

At Friday's hearing, several people told the EPA they blame ozone for their health problems.

"I'm someone who never used to have breathing problems," said Marie Venner, who lives in the Denver suburb of Lakewood. Now, it sometimes hurts to take a breath, she said.

Seby said Polis' decision was based on politics, not facts.

Polis' predecessor, Democratic Gov. John Hickenlooper — who ended his presidential bid last month and is now running for the U.S. Senate — had asked for the exemption based on data showing that pollution elsewhere and forest fire smoke from other states had pushed Colorado over the limit, Seby said.

"Gov. Polis came into office and the exact opposite came about," Seby said. "The data didn't change, the science didn't change — except for the politics."

Anna Unruh, an air quality consultant for Trinity Consultants, which helps businesses get environmental permits and comply with regulations, agreed that a lower rating would complicate life for businesses and industry.

New businesses and expansion projects might have to go through a longer, more rigorous process to get permits, she said. Existing operations might have to get an additional permit. More businesses would have to devote employee time to monitoring and reporting on their pollution.

"Permitting definitely will get more difficult," she said in an interview.

Failing to act on dirty air also has economic costs, especially to Colorado's vital tourism economy said Robert Ukeiley, an attorney for the Center for Biological Diversity. Nitrogen and other pollutants are affecting the environment and the views in Rocky Mountain National Park, the third-most-visited park in the nation, about 60 miles (95 kilometers) northwest of downtown Denver.

"People don't want to go to a national park and look at smog," Ukeiley told the EPA at Friday's hearing.

In addition to Denver, counties affected by the change are Adams, Arapahoe, Boulder, Broomfield, Douglas, Jefferson, Larimer and Weld.