The company behind the world's top-selling bourbon is spending tens of millions of dollars to boost craft whiskey production. 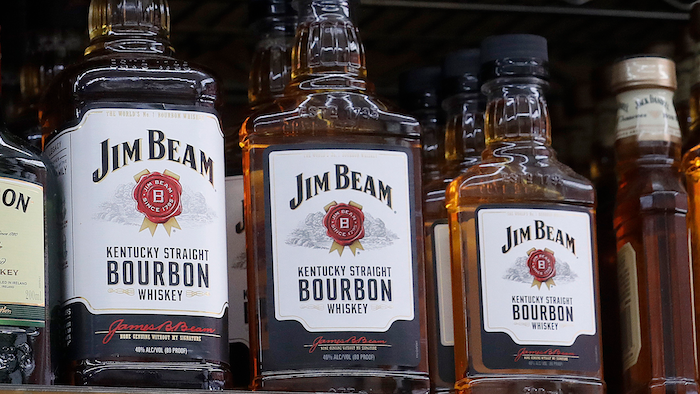 In this July 9, 2018, file photo, Bottles, Jim Beam are displayed at Rossi's Deli in San Francisco. The company behind the world's top-selling bourbon, Jim Beam, is pouring tens of millions of dollars into a new Kentucky distillery to boost production of craft whiskeys.
AP Photo/Jeff Chiu, File

FRANKFORT, Ky. (AP) — The company behind the world's top-selling bourbon, Jim Beam, is pouring tens of millions of dollars into a new Kentucky distillery to boost production of craft whiskeys.

Beam Suntory executives broke ground Thursday for the production facility at their flagship bourbon distilling operation in Clermont. It's part of a $60 million investment that includes raising Beam's profile by upgrading the "visitors' experience" at Clermont as bourbon tourism grows.

The company is looking to build on the momentum for its super-premium craft brands, which have experienced double-digit yearly growth. The bulk of sales are in the U.S.

"We felt this was the time now to really elevate our commitment to premiumization, innovation and also education," Beam Suntory President and CEO Albert Baladi said by phone.

A recent storage warehouse fire in Kentucky that destroyed about 45,000 barrels of aging whiskey had minimal impact on the company's upward trajectory. Beam Suntory plans an "exhaustive review" of its warehouses to look for ways to reduce risks and minimize environmental damage if fires occur, Baladi said. Its warehouses have lightning protection and sprinkler systems. Lightning sparked the recent fire.

The new craft distillery will be named for Beam master distiller Fred Noe, 62, a great-grandson of Jim Beam and the seventh-generation distiller to carry on the family's whiskey-making tradition.

His father, famed distiller Booker Noe, was a pioneer in crafting small-batch bourbons, created by mixing the contents of a relatively small number of selected barrels.

The popularity of craft bourbons helped fuel the industry's comeback. Such super-premium whiskeys typically take longer to age and fetch the highest prices.

"In a way, we were craft before craft was cool," Baladi said.

The new distillery will become the production home for such small-batch bourbons as Booker's and Baker's. It also will produce Little Book, a whiskey created by Noe's son, Freddie.

It's also where the Beam team will work on new fermentation and distillation techniques, reflecting the industry's push for new flavors and offerings.

The top-selling Jim Beam brand is produced at Clermont and another distillery nearby. So are other super-premium brands such as Knob Creek, Basil Hayden's and Legent.

"What we're beginning here today reinforces our leadership in bourbon and sets us up for the future," said 31-year-old Freddie Noe.

Beam Suntory said it invests more than $500 million each year to make bourbon in Kentucky.

Beam's investment, its largest at Clermont in the past decade, comes as Kentucky's U.S. senators push for a tax code change to support the bourbon sector's growth.

The legislation introduced Wednesday by Senate Majority Leader Mitch McConnell and Sen. Rand Paul would make permanent a soon-to-expire provision in the tax code that allows for the deduction of interest expenses related to bourbon inventory in the year the expenses are paid.

The Republican lawmakers said their bill aims to protect bourbon distillers' competitiveness with spirit makers abroad. The bill exempts the natural aging process from the production period for distilled spirits. Before the provision was signed into law as part of the 2017 Republican tax cut, interest expenses were not deducted until the bourbon was bottled and sold — which could take from two to more than 20 years, depending on the aging process.

The Kentucky senators said it's comparable to a homeowner not being able to deduct the interest on a home mortgage until the house is sold.

Beam's expansion comes amid an overall $2.3 billion building boom among members of the Kentucky Distillers' Association, according to the group. The projects include new and expanded production facilities, more warehousing and bottling lines and new and expanded tourism centers. Kentucky produces about 95% of the world's bourbon.

Beam's investment also includes a recently announced $5 million donation to the University of Kentucky to establish the James B. Beam Institute for Kentucky Spirits to help teach the bourbon industry's next generation of master distillers.