The legislation sets up a commission to approve smart guns, which are personalized firearms that can be fired only by authorized users. 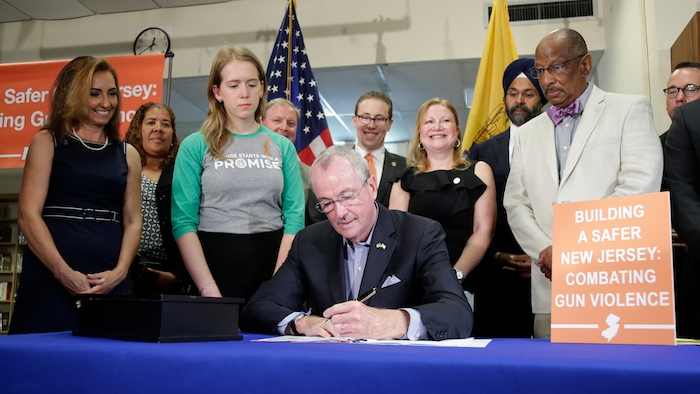 Murphy, a Democrat, signed the bill at Governor Livingston High School alongside Attorney General Gurbir Grewal, lawmakers, local officials and at least a couple dozen members of Moms Demand Action for Gun Sense in America who were wearing red T-shirts.

The measure sets up a commission to approve smart guns, which are personalized firearms that can be fired only by authorized users. The measure also repeals part of a 2002 law that was blamed for the slow pace of getting smart guns to market.

The new measure also requires that retailers offer a personalized gun for sale as they become available.

Murphy said he is confident the new law will succeed because it will allow research and development on smart guns to go forward, unlike prior law.

"The last one had the unintended consequence ... which basically allowed the enormous amount of pressure on the gun manufacturers to not pursue the R&D that was necessary."

Murphy was referencing the 2002 law that said when a smart gun became available anywhere in the country, New Jersey retailers could offer only those weapons for sale.

Second Amendment rights supporters pushed back against the development of smart guns over concerns that their marketability would amount to a handgun ban in New Jersey, according to Murphy and the law's sponsors.

Republican Chris Christie vetoed similar legislation in 2016, saying that the Democrat-led Legislature was seeking to make the state as "inhospitable" to gun owners as possible.

Scott Bach, the head of the Association of New Jersey Rifle & Pistol Clubs, criticized the law and said lawmaker were trying to force smart guns into the marketplace.

"Swapping one failed mandate for another dooms smart guns to failure," Bach said.

Murphy also signed three other measures aimed at stopping gun violence. One bill requires that the attorney general and health commissioner come up with a suicide prevention and training course for gun sellers.

Another bill restricts people convicted of serious crimes from buying firearms, as well as barring the sale of guns without a serial number. A fourth bill makes it a crime to solicit a gun from someone who is already legally disqualified from buying a weapon.

"I am proud to work with our legislators to implement some of the toughest gun laws in the country to protect our residents and make our communities safer for all," Murphy said Tuesday.

Among the bills he signed in 2018 was a measure reducing magazine capacity from 15 to 10 rounds as well as legislation requiring mental health professionals to warn law enforcement if a patient threatens serious violence against themselves or others.