A two-year pilot project resulted in a metal additive manufacturing process that company officials say requires no manual work at any stage. 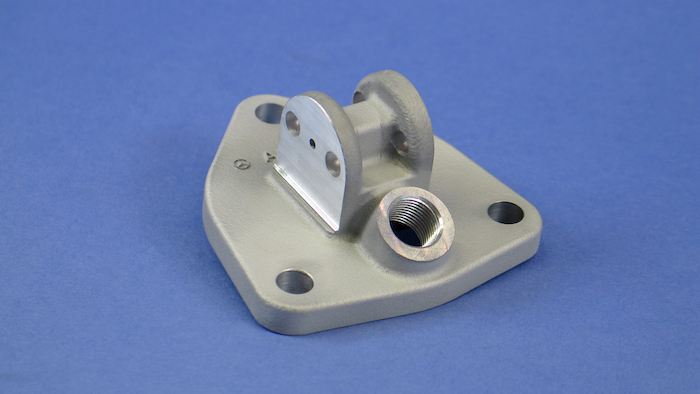 The retainer of a diesel truck engine, the first spare part of the partner pilot project "NextGenAM" from Daimler, Premium AEROTEC and EOS.
Daimler AG

The automaker, along with 3D printer maker EOS and aerospace company Aerotec, formed the “NextGenAM” project two years ago in hopes of developing practical 3D printing processes for aluminum components. Officials called the effort a “complete success” and said that Aerotec’s manufacturing costs could be reduced by up to 50 percent compared to parts made by current additive manufacturing systems.

The partner companies said the pilot project resulted in a fully automated production chain that does not require any manual work at any stage, including data and powder preparation through the printing and finishing process. It features an EOS M 400-4 four-laser printer, as well as robots and a driverless transportation network to move parts along — all organized by a central control station.

The system wirelessly delivers status updates and quality reports, and more production chains can be added to meet the scale demands of major manufacturers, officials said.

“Systematic development of the parts specifically for 3D printing means that the production costs can be further reduced and the quality optimized,” Jasmin Eichler, who heads Daimler’s Future Technologies efforts, said in a statement.

An automated production line at Aerotec is already making brackets for Daimler’s diesel truck engines, and the company’s bus segment is evaluating production of rarely needed replacement parts. Daimler’s passenger vehicle engineers, meanwhile, are considering how to deploy the system in its auto plants, including for forthcoming electric vehicles.

The automaker said the aluminum’s material properties improved substantially over the course of the pilot project; officials are preparing for an audit to ensure the parts meet industry standards.

“The pilot plant represents nothing less than a milestone along the way to digital manufacturing,” said EOS CEO Adrian Keppler.