Departing Foxconn leader Terry Gou met with President Donald Trump and Wisconsin Gov. Tony Evers this week in an attempt to put concerns about the project to rest. 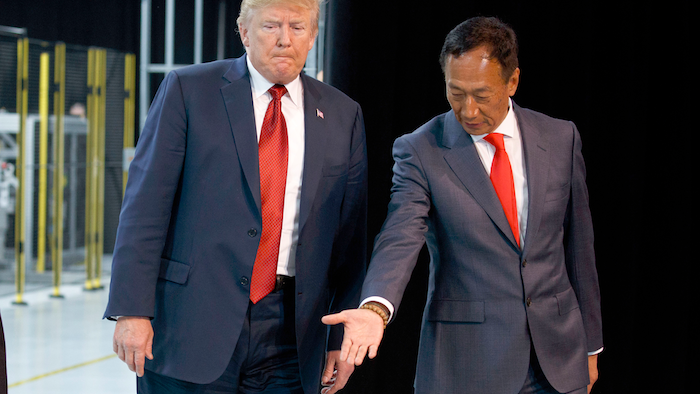 Foxconn Technology Group leader Terry Gou met privately with Wisconsin Gov. Tony Evers for the first time on Thursday, a day after Gou recommitted to a massive project in the state following a White House meeting with President Donald Trump.

Questions about Foxconn's commitment to the Wisconsin project have swirled for months, but Gou and the project's backers tried to put those to rest. Evers, who ran for office as a critic of Foxconn, said he hoped the project would be successful, even if it's smaller than originally envisioned.

Foxconn, the world's largest electronics company whose customers include Apple, Amazon and Google, plans to build a display screen factory in southeast Wisconsin. Foxconn reached the deal with former Republican Gov. Scott Walker and Evers was critical of the taxpayer credits promised to the company during his successful campaign against Walker last year.

Evers, after the meeting, appeared to retreat from his previous comments that he didn't think Foxconn would employ 13,000 people. Last month Evers said it was "unrealistic" and "difficult to imagine" that Foxconn would hire that many given that it was downsizing the display screen factory it was building.

The number of jobs Foxconn creates "could be less, it could be more" than 13,000, Evers told the editorial board of the Racine Journal Times and Kenosha News.

Evers said he and Gou had a "great conversation" and they were "building a good relationship." Evers said they also discussed how Foxconn operations would change as Gou steps away from daily operations to run for president of Taiwan.

After waffling earlier this year on its intentions, Gou recommitted to the project in February after a meeting with Trump. Gou said that during their meeting Wednesday, the president committed to coming to Wisconsin in May 2020 to see the start of production, according to Kyodo News.

Gou is spending a lot of money in Wisconsin "and soon will announce even more investment there," White House press secretary Sarah Sanders said in a statement.

Trump has been a vocal backer of the project, proclaiming it the "eighth wonder of the world" and he visited Wisconsin last summer for the groundbreaking. Trump has heralded the development as a sign of resurgence in American manufacturing.

But skeptics question whether Foxconn will fulfill its commitments in the project, citing others it has promised but failed to deliver around the world. Foxconn failed to meet its job targets last year to qualify for tax credits in Wisconsin and has downsized the type of factory it intends to build.

Evers, a Democrat, has said Foxconn wants to make changes to its contract with the state, which has promised to make more than $4 billion available in state and local tax credits if Foxconn spends about $9 billion and hires 13,000 people.

"Perhaps today Gov. Evers has accepted the fact that Gov. Walker and Republicans negotiated a really good deal for the state of Wisconsin and perhaps hearing it directly from chairman Gou's own mouth he can accept the reality that Foxconn is going to be a huge benefit for our state and we should all celebrate it," Vos said.

Evers was joined at the meeting with Gou by the state's chief economic development official who brokered the original Foxconn deal. Gou was also met separately with local leaders in southeast Wisconsin, including Vos.

Gou told reporters after his meeting with Trump that the company remained committed to Wisconsin.

"It is not right to say our investment in Wisconsin has changed," Gou said in a video broadcast by Taiwan media as reported by Nikkei Asian Review. "We suspended the work around October, November last year because the weather there was snowy and icy cold. We will continue our work in May when the weather gets warmer."

One of the other items discussed, according to Kyodo News, was Gou's plans announced last month to run for president of Taiwan.

Gou, Taiwan's richest man, told Trump that if elected, he intends to be a "peace maker" rather than a "trouble maker," Kyodo News reported. Gou also told Trump that he would commit himself to advancing peace and stability and improving Taiwan's economy. Gou told Trump that he wanted to strengthen economic ties between Taiwan and the United States and make their economic relations a top priority.

Sanders said Trump did not discuss support for Gou's campaign in their meeting.