Union leaders said they were unable to convince Wabtec to negotiate an "acceptable short term agreement" covering some 1,700 employees. 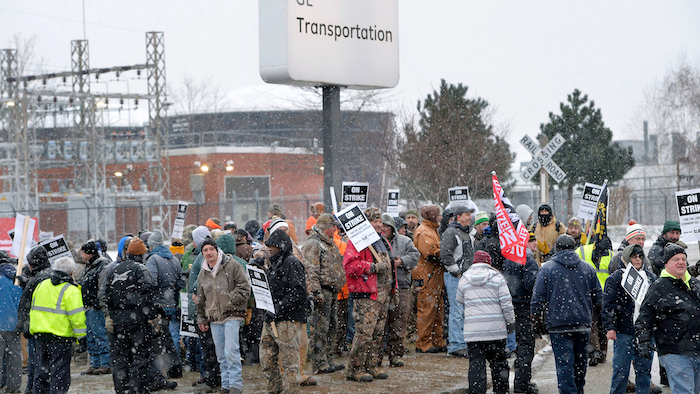 Wabtec Corp. employees, who are members of UE Local 506, strike near the west gate of the former GE Transportation plant in Lawrence Park Township, Pa., on Tuesday, Feb. 26, 2019.
Greg Wohlford/Erie Times-News via AP

Workers at the former GE Transportation plant in northwestern Pennsylvania have gone on strike for the first time in a half-century, and a day after completion of a merger between GE Transportation and Wabtec.

Leaders of UE Locals 506 and 618 said in a statement that they were unable to convince the company to negotiate what they called an "acceptable short term agreement that preserves the wages, benefits, and working conditions" for the 1,700 employees.

Scott Slawson, president of Local 506, which represents all but a handful of the striking UE members, said he was especially disappointed that Wabtec would not agree to a 30-day extension of the existing contract.

With the merger, members of the UE locals became Wabtec employees and were subject to terms proposed by it including a two-tier wage structure for new employees, mandatory overtime to meet customer demands, consolidation of job classifications and a requirement that at least part of employee vacations be taken during plant shutdown periods.

Wabtec, based in Wilmerding, near Pittsburgh, said in a statement that the company was "very disappointed" by the unions' action, which the company said "hurts their members and the community of Erie." The company said it offered "a generous proposal" preserving wage rates for current employees and "a competitive 401K plan, comprehensive medical, dental and vision package and accrued personal paid time off."

"No one ever benefits from a walkout," the company said. "Employees lose wages and the company's ability to deliver products to customers on time is jeopardized. Wabtec looks forward to returning to normal operations."

The last strike by union members at what was then GE Transportation occurred in 1969 and lasted 102 days. The union has since staged short-term walkouts of several hours but no plant-wide strike.