Continental hopes to begin producing truck tires at the $1.4 billion complex in central Mississippi by next January. 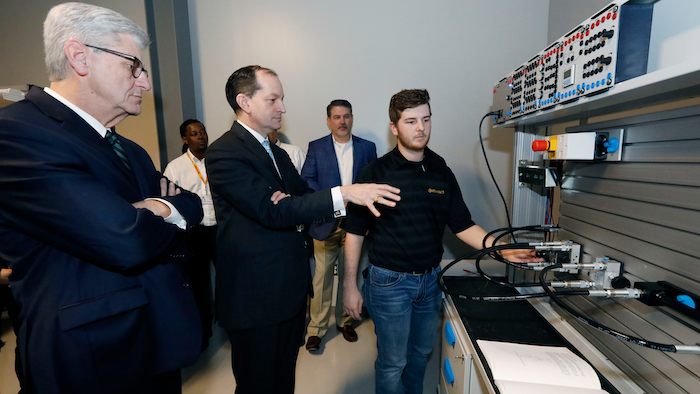 Continental AG is beginning to gear up worker training at the $1.4 billion tire-making complex that it's building in central Mississippi, as it aims to start producing truck tires by next January.

Gov. Phil Bryant and U.S. Secretary of Labor Alexander Acosta toured the German conglomerate's job training facility Friday, where Continental will train the 2,500 workers it says it will hire by 2028.

So far, 83 workers have been hired, with Continental spokeswoman Quita Bride saying the company will have 250 workers by the start of next year. That's when the company will open a roughly 1 million square foot (90,000 sq. meter) facility that will eventually make 750,000 tires for large trucks and buses. The company plans to add about 250 employees a year until it reaches its full employment goal in 2028. Production employees are supposed to make $40,000 a year, on average.

"That's why we built this facility first. It went up before the plant, because we want to make sure we have exactly the right skilled labor," Williams told reporters.

As the company trains its early workers, it is emphasizing what it calls its core values, "passion to win, trust, freedom to act, for one another," plant manager Michael Egner said. Some have been sent to Continental plants elsewhere for more training.

The company has hired some employees from Hinds Community College. Acosta said that was an example of ensuring that education and training meet employer needs.

"We call it demand-driven education — education that responds to the demands of the workforce," Acosta said.

The aid from Hinds is part of more than $650 million in cash and tax breaks that Continental could get from state and local governments.

In one room, the company was showing off where maintenance technicians are training on programmable logic controllers, computers that control industrial machinery. There, Continental also has a virtual reality model of the plant, allowing employees to put on goggles and get the sense of what the facility will be like when complete.

"It looks a little bit like a video game but it really adds value," Egner said.

Continental also showed off hydraulic machinery meant to teach maintenance technicians how to troubleshoot and repair the hydraulics that will run machinery that makes tires.

"This is not the old, dark manufacturing of the 1940s," Bryant said.