After a series of natural gas explosions and fires, the NTSB said Massachusetts should require a professional engineer to sign off on projects before work starts. 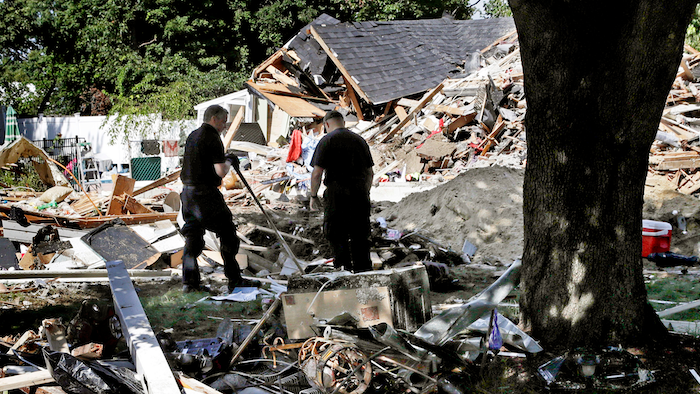 In this Sept. 21, 2018 file photo, fire investigators pause while searching the debris at a home which exploded following a gas line failure in Lawrence, Mass.
AP Photo/Charles Krupa, File

In the wake of September's natural gas explosions and fires, Massachusetts should require a professional engineer to sign off on all public utility projects before any work starts, the National Transportation Safety Board recommended Thursday.

The federal agency, which has been investigating the Sept. 13 incident near Boston, suggested in a brief report released Thursday that a licensed engineer could have potentially spotted critical omissions that triggered dozens of explosions and fires in the city, neighboring Andover and North Andover.

Most states, including Massachusetts, exempt public utilities from such requirements and Columbia Gas's internal planning process didn't call for it, the agency noted.

The NTSB also made four other recommendations to NiSource, Columbia Gas' parent company.

Among them was strengthening the company's planning process by ensuring all departments review construction documents and that plans be developed or reviewed by a professional engineer.

The NTSB has previously said company officials failed to take into account the location of gas pressure sensors as they planned and designed the replacement of old gas lines, some of which were more than a century old.

In Thursday's report, the agency disclosed the Columbia Gas field engineer who had developed the engineering plans failed to review drawings where the sensors were documented and appeared to have "limited knowledge" about their importance or the "consequences of losing the capability to sense the main pressure via the regulator-sensing lines."

The NTSB said the engineer also didn't seek review from other company departments that might have spotted the oversight.

The omission caused gas lines to become overpressurized, leading to a string of explosions and fires, which killed one person, injured dozens of others and damaged or destroyed more than 100 buildings. Thousands of residents and businesses are still without natural gas service for heat and hot water.

NiSource, in a statement Thursday, said it has already implemented some of the recommendations, such as installing over-pressurization protection devices and real-time monitoring systems on all its low-pressure natural gas systems.

The company said the protective systems will immediately cut off gas if operating pressure is too high or too low.

The state Department of Public Utilities said it's reviewing the recommendations.

And Columbia Gas said Thursday crews would work on the Thanksgiving holiday next week to continue restoring gas service. The company had planned to give workers the day off, but Lawrence Mayor Dan Rivera had publicly urged them to press on this week.

Columbia Gas initially hoped to restore all natural gas service before Thanksgiving, but recently acknowledged it would not meet that deadline. The utility now hopes to have the work completed by mid-December.