Skyscrapers May Have Worsened Hurricane Damage 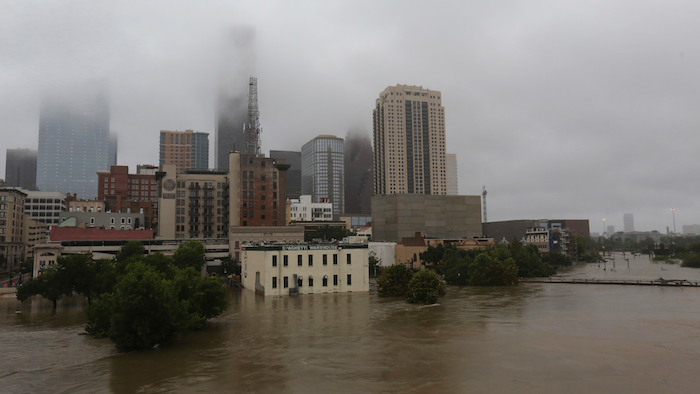 Hurricane Harvey snagged on the skyscrapers of Houston, causing it to slow and dump more rain than it normally would, one study found. The city's massive amounts of paving had an even bigger impact by reducing drainage. Land development in the metro area, on average, increased the chances of extreme flooding by 21 times, study authors said.

A second study looked at last year's major Hurricanes Maria and Irma and 2005's deadly Katrina and used computer simulations to see what would have happened if there had been no human-caused global warming. The study found that climate change significantly increased rainfall from those three storms, but did not boost their wind speed.

Both studies are in Wednesday's journal Nature .

Houston was a literal drag on Harvey as it sloshed through, with the storm getting tripped up by the skyscrapers, said study co-author Gabriele Villarini, a civil and environmental engineering professor at the University of Iowa.

Co-author Gabe Vecchi, a climate scientist at Princeton University, said that forced the storm to move up higher, causing more concentrated rain over Houston and slowing, which also made more rain.

He compared it to a river running over rocks, creating bubbles.

"That's sort of what's going on here," he said.

This effect is dwarfed, though, by the paving and building that don't allow water to sink into the ground, Vecchi said.

Harvey's record rainfall reached 5 feet in one spot near Houston. The scientists used computer simulations to see the effects of urbanization. In parts of the Houston metro area, the effects of development ranged from a 10 percent higher risk of extreme flooding in the less developed northwest to nearly 92 times the risk in the northeast, they reported.

That's on top of the unique weather patterns that made Harvey slow down and stall and climate change which brought more water into the storm, Vecchi said.

MIT hurricane and climate expert Kerry Emanuel, who wasn't part of the study, called the Harvey study "a real advance in our understanding of hurricane impacts on urban areas."

But Texas state climatologist John Nielsen-Gammon wasn't convinced. He said the team used generic shapes instead of the actual Houston skyline. He said the storm's wind speeds may have slowed, but that's different from the storm's forward movement slowing.

The other study in Nature looked at a variety of historical damaging storms and tried to calculate past and future effects of climate change. In three cases, the scientists simulated the storms without the changes in the climate from greenhouse gases, showing that global warming increased rainfall 8.9 percent in Hurricane Maria , 6.3 percent in Hurricane Irma and 8.7 percent in HurricaneKatrina .

Maria hit Puerto and Rico and other parts of the Caribbean. Irma hit the Caribbean and Florida, while Katrina struck New Orleans and the Gulf Coast.

In Maria's case, a warming climate concentrated heavier rain in the center of the storm and reduced it on the edges, said co-author Michael Wehner, a climate scientist at the Lawrence Berkeley National Laboratory.

For 15 storms, which included the devastating Typhoon Haiyan , the potent Gilbert and 1992's Hurricane Andrew , the scientists projected future warming and found future versions of the same storms would be significantly wetter and stronger.

"We are beginning to see a climate change influence emerge on tropical cyclones and that's coming out as rainfall," said study lead author Christina Patricola, an atmospheric scientist at the national lab.

Although replicating a storm in a different climate is difficult and can't account for certain changes, this work bolsters science understanding of how climate change alters hurricanes, Emanuel said.