Boston Dynamics demonstrated the capabilities of its SpotMini robot by tethering a team of them to one of its box trucks.

Back in June 2016, Boston Dynamics introduced the world to the SpotMini, a smaller version of the BigDog that was more geared to the consumer industry. The thought was that it could perform up to 90 minutes of chores on a single charge — everything from loading the dishwasher to fetching snacks.

Over the last two years, the robot dog has received some upgrades and has, according to the company, begun production.

Now that Spot is preparing to come trotting off the production line, Boston Dynamics wanted to show off some of the robot's capabilities — and doing so in dramatic fashion seems to be a particular skill for the company.

Boston Dynamics tethered 10 Spot robots together and had them pull a box truck across the company's parking lot in Massachusetts.

The two SpotMinis in the lead include the arm attachment that adds five-degrees of freedom, as well as about 11 pounds to the frame. Each pup includes a sensor suite that helps it navigate.

While the company claims that Spot is in production, a price hasn't been made public and the website doesn’t contain any information on potential pre-orders. 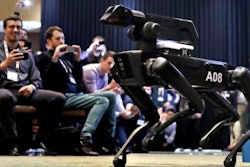 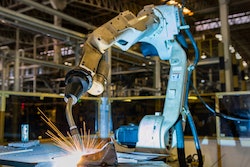